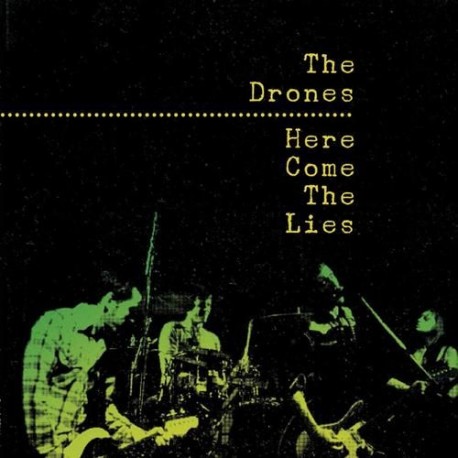 The Drones - Here Come The Lies

So here it is! "Here Come The Lies" from The Drones. In order to exceed the sound pollution of Melbourne's - the hometown of the band - big city noise back in the day (2003), The Drones overdrive their amps to a brutal level, strum their strings the hard way and beat the drums in a way unheard-of. This is blues from the gutter. Big city blues, although some call it noise. Sure, there's enough overdriven chords on this album to please any noise fan. But there's more. The sound is swaying between a chorus of dissonance and numerous tactical silences, only to emphasize the music even more. You can't have noise if you don't have silence (makes sense doesn't it?). Also, the band writes lyrics that fully correspond to the music, making the package truly a whole. Helping the band doing this is the anti-production-a-go-go; thank you for the squeals and the good feedback. Rock and blues, that's what The Drones are all about. Doing it the hard way. Deluxe gatefold double LP reissue of this already classic album, limited to 500 copies!

Side A:
The Cockeyed Lowlife Of The Highlands
Dekalb Blues
The Downbound Train

Side B:
I'd Been Told
New Kind Of Kick
I Walked Across The Dam

Side D:
The Island
Six Ways To Sunday
The Country Of Love