> Vinyl>Kim Fowley - Living In The Streets 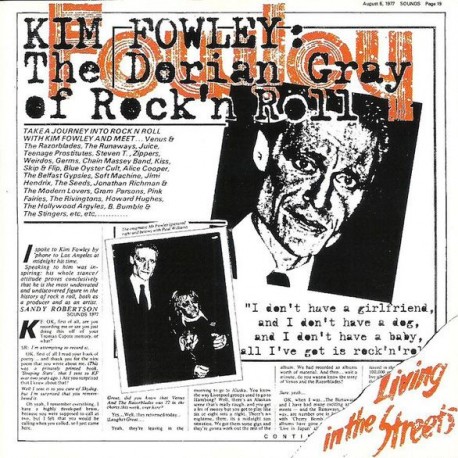 Kim Fowley - Living In The Streets

With a career that includes hits as producer ('Alley Oop' by The Hollywood Argyles), songwriter ('Nut Rocker' by B Bumble & The Stingers), recordings with Gene Vincent, Jonathan Richman & The Modern Lovers and countless others, his early management of The Runaways and plenty of glorious failures along the way, Kim Fowley has been a maverick presence in rock & roll history for over fifty years. "Living In The Streets" (1977) is a compilation of his solo recordings, some of them dating back to the beginning of the decade. 'Born to Make You Cry' and 'Thunder Road' - recorded in collaboration with Mars Bonfire - had first appeared on a single on Original Sound in 1970. As had 'Big Bad Cadillac' (a homage to Vince Taylor's 'Brand New Cadillac') and 'Man Without A Country,' released under the name King Lizard, and recorded in Sweden while he was producing Wigwam's "Tombstone Valentine" album. Originally released on Chattahoochee in 1973 under the alias Jimmy Jukebox, 'Motorboat' is now regarded as a Fowley classic. That song and its B-side, '25 Hours A Day' was written and recorded in collaboration with his good friend Michael Lloyd, who Fowley had been making records with since the mid-sixties. 'California Summertime' and 'Hollywood Nights' were recorded in 1974 at Gold Star Studios in Hollywood and released as a single on the Now label under the unlikely sobriquet of Lance Romance. Three songs - plus the spoken piece 'Sex, Dope and Violence' - made their debut on the album: 'Summertime Frog', 'Love Bomb,' and 'Living in the Streets.' All are acoustic and show a certain Captain Beefheart flavor, the former, and some Dylanesque influence, the later. "Living in the Streets" remains a worthy monument to the seventies recordings of the Dorian Gray of Rock 'n' Roll, the human jukebox: the unstoppable Kim Fowley.

Side B:
Born To Make You Cry
Thunder Road
Summertime Frog
Love Bomb
Living In The Streets
Sex, Dope & Violence