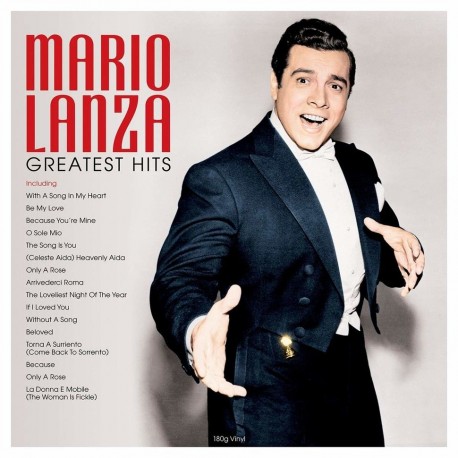 America's Italian immigrants have had a disproportionate effect on the country's culture, and especially music. The likes of Frank Sinatra, Dean Martin, Perry Como and Al Martino lit up the airwaves with their cultured crooning and are still revered in the current century. Mario Lanza is another name to rank up there with the greats. His story ended in 1959 at the age of only 38 - yet, for one golden postwar decade, his was the name on everyone's lips. He was also one of Hollywood's biggest stars, and from the moment he burst onto the screen in That Midnight Kiss in 1949 through to his last film, Lanza's good looks and exuberant personality made him a big-screen natural.

Side A:
With A Song In My Heart
Be My Love
Because You're Mine
O Sole Mio
The Song Is You
(Celeste Aida) Heavenly Aida
Only A Rose
Arrivedderci Roma

Side B:
The Loveliest Night Of The Year (From 'The Great Caruso')
If I Loved You
Without A Song
Beloved (From 'The Student Prince')
Torna A Surriento (Come Back To Sorrento)
Because
Only A Rose
La Donna E Mobile (The Woman Is Fickle)