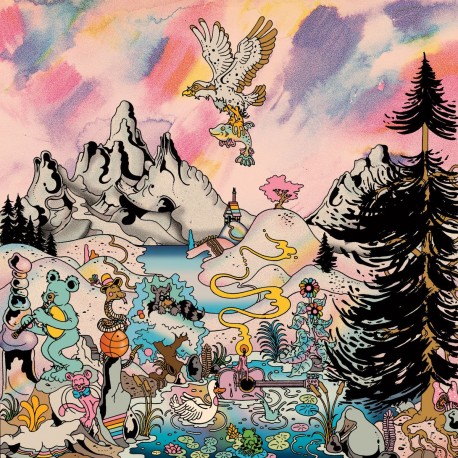 Patrick McDermott began his North Americans project with two albums: 2013's No_No, and 2015's Legends. Both records were dense affairs, with blocks of sound shifting and moving like melting glaciers to create a gorgeous, impenetrable, collection of digital drones. Though they sounded nothing like what would come a bit later, both records showcased McDermott's understanding of mood and composition. On 2018's Going Steady, McDermott blended his love of American Primitive guitar playing with playful pieces that never overstayed their welcome. He also began collaborating with a wide range of artists: from Julianna Barwick to guitar prodigy Hayden Pedigo, as well as Cloud Nothings' Dylan Baldi, and more. Now, two years later, McDermott is releasing Roped In, a gorgeous, intimate, and often spare album that pulls back from the collaborative nature established on Going Steady for a collection of fragile drone pieces anchored by McDermott's intricate but direct guitar playing and haunting pedal steel work from Portland, Oregon's Barry Walker. McDermott began work on Roped In as he was finishing up Going Steady. In his spare time throughout the day, he'd record short instrumental passages in his voice notes app. There was no specific goal or intention at the start, but soon a new album began to take shape. "Every time I picked up the guitar, I'd play something that made sense for what I was doing," McDermott says. "I had like 40 demos and literally in one night I went into the studio with my guitar and I recorded all of the pieces," McDermott says. "I selected 15 of those and sent them to Barry." The original plan was for McDermott to travel from Los Angeles to Portland to work directly with Walker, but work got in the way, so the pair sent demos back and forth over email, with McDermott laying down a guitar loop, and Walker adding ghostly strains of pedal steel over the top. "[The guitar tracks] were little coherent packages," Walker says of his working relationship with McDermott. "All of these different ideas bubbled up out of listening to these things-this texture and these little nuances that we were able to explore." Where Going Steady was brimming with ideas and micromovements, Roped In is relatively sparse, built on patience and the kind of once-in-a-lifetime collaborative energy between McDermott and Walker, and accented by occasional collaborations from harpist Mary Lattimore and guitarist William Tyler. "I wanted to focus on the simplicity of the music," McDermott says. "I didn't want to be beholden to this massive goal of [making music] to see how progressive and experimental it could be. I was attempting to cherish the pureness of this type of music." Across the album's nine tracks, McDermott and Walker use that simplicity and the directness of communicating emotions through music as both a jumping off point and a parameter. "Greetings From a Distant Friend" initially seems like a foray into dusty western atmospherics-think an abandoned border town with a lone vulture circling overhead-but gradually opens up into an unsettling, crystalline drone that warps textures and moods so that its desolation feels less uncomfortable than it does weirdly compelling. Meanwhile, on "Furniture in the Valley," McDermott's restraint is on display, as his guitar fades behind dubby twinkling harp from Mary Lattimore, creating a solid counterpoint for the overwhelming fragility of the track, which is filled with so much subtle detail it's worth putting on repeat for an entire afternoon. Elsewhere, on "Rivers That You Cannot See" McDermott's soft strumming forms a hypnotic bed for Walker's fragile pedal steel work, which arcs over the top of the track repeatedly before quietly trailing off. The song is something of a thesis statement for all of Roped In, it's deceptively uncomplicated, but easy to get lost in-not so much a product of McDermott's interaction with the natural world around him, as it is a product of the ups and downs of life itself. Like much of Roped In, it's about the clarity that can come from quiet moments, and how those moments are worth sticking with for as long as we possibly can.

Side A:
Memory of Lunch
Rivers That You Cannot See
Furniture in the Valley
American Dipper
Yearling

Side B:
Run Down
Good Doer
Greetings From A Distant Friend
Break Maiden