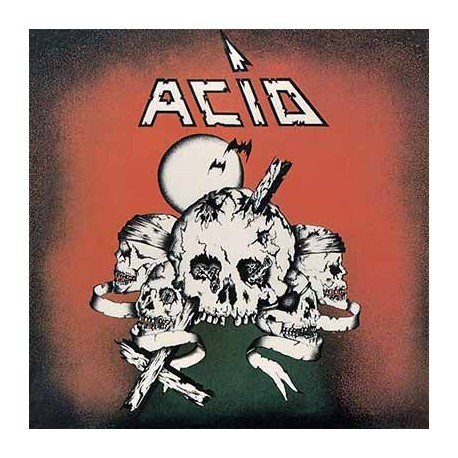 Audio restoration and mastering by Patrick W. Engel at TEMPLE OF DISHARMONY in March 2019. Vinyl cutting by SST.

As one of just a few early European bands, Acid garnered a cult following with only three albums - not least since their uncompromising music ranked among the most extreme you could get in the early 1980s,

In fact, the Belgians were forerunners on several levels, particularly regarding their singer because while maybe not being the first female-fronted metal band, thy were surely the heaviest group with a woman behind the mic.

The quintet's proto speed metal was informed mainly by MotÃ¶rhead and Venom but even rawer than the latter on their self-titled 1983 debut. With songs like 'Hell On Wheels' and the self explanatory 'Hooked On Metal' from their earliest songwriting sessions, or the short outburst 'Anvill' and the closing mini-drama 'Satan', banshee Kate de Lombaert and her brothers in arms already set a very high standard for themselves and others.

Originally released on the group's own label Giant Records and re-issued several times in more or less satisfying ways and different formats, High Roller now offer the ultimate edition of "Acid" with the 1982 single "Hell On Wheels / Hooked On Metal" as added bonus on both CD and vinyl.

The latter is available in different colours and housed in 425g cardboard with lyric insert, poster and the additional tracks on a separate 7" with picture sleeve. Patrick W. Engel restored and mastered the best lossless audio sources available at Temple of Disharmony, the LPs were cut at SST Germany on Neumann machines for optimal quality on all levels.

Side A:
Acid
Ghostriders
Hell On Wheels
Anvill
Demon

Side B:
Hooked On Metal