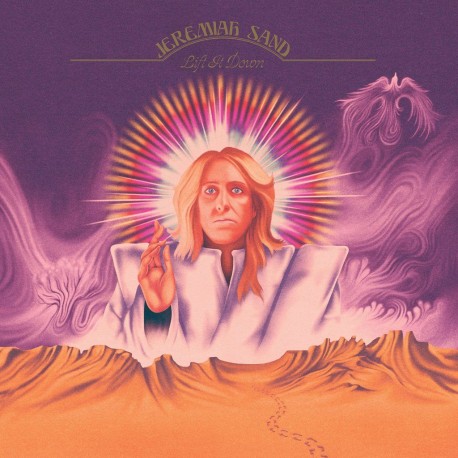 Jeremiah Sand - Lift It Down

In 1974, Jeremiah Sand and his nascent cult The Children Of The New Dawn decamp LA for the Shasta Mountain region and Redding, CA. They set up shop, begin printing leaflets, hold gatherings and start growing their ranks through recruitment. Jeremiah and the Children are not necessarily an odd addition to Redding in 1974. Since the 1930s, psychonauts and spiritual seekers have been drawn to this area in Northern California under the shadow of the dormant volcanic cone of Shasta. By 1974, urban California hippies worn down by direct political engagement with state security forces have started drifting North and the towns along the border with Oregon state are filled with ad-hoc spiritual organizations, commune builders and lost souls. A flawed and malignant sounding unfinished thing, clearly the product of a psychotically inflated ego and hubris. The album is by turns: amateurish, haunting, deranged, ridiculous and (for those attuned to these things) filled with crackling negative psychic energies. So much so that Light In The Attic flat out refuses to reissue it. Eventually, it lands in Caleb's lap and Sacred Bones decides to restore the audio and give it a general release all in the name of preserving a historical document of a very weird place and a very weird time.

Side A:
Lift It Down
Message From The Mountain
Love Is
Now You Are Mine

Side B:
There Once Was A Man
Golden Desert
Golden Fervor
Taste The Whip