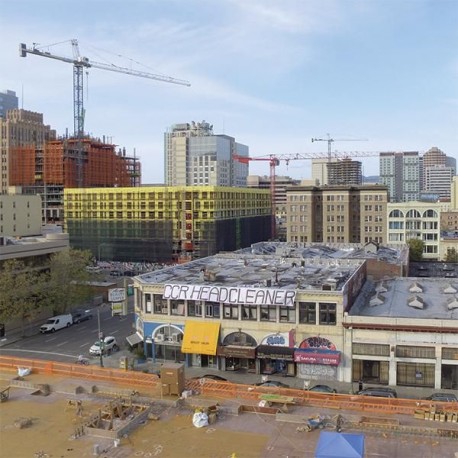 "The Bay Area in 2019 is a fucked up place. I m living in the shadow of brand new tech tower nursing my beer at the horseshoe bar of Jonell s, the last of the great TL haunts. I stumbled here past numerous encampments of tired souls driven to the streets by the same people who walk by everyday with brand new air pods and upturned noses, actively disdainful of the people whose problems they have helped create. Despite my disenchantment I can t shake the ringing in my ears from blasting tunes in my SRO... "Street Riffs, the new album from a band called CCR Headcleaner, who I figured like everyone else had left the Bay long ago for greener pastures, maybe somewhere like LA it turns out these mutants have been slugging it out, trudging through the gutters of the Bay Area since I first heard of them. The live shows were legendary. Fire, walls of noise, Tom Petty covers, guitars played with machetes, acid fueled freakouts, sweaty basement shows and big venue blowouts. Borrowed gear on borrowed time. I even heard the guitar player burned the merch money handed to them in front of a bright eyed young fan who had just purchased the record. "So the cover of Street Riffs, crowded with cranes and construction really conveys the claustrophobic catastrophe of modern city living. And the music! Brash frenetic riffs and primordial thundering rhythms weave in and out of ethereal melodies in a surprising amalgamation of experimental underground and working peoples rock and roll. "I heard these boys enlisted local SF stalwart producer Eric Bauer, aka King Riff, to help clean the walls without changing the paint. And believe me this sucker sounds huge. As I sit here in this bar, a vestige of days gone bye, wondering if I ll ever clean up my act, I can t help but find solace in these miscreants fighting the tide of repackaged riffs and bullshit psychedelia. A middle finger to the face of modern rock and roll. These are street riffs." Mike Plaid

Side A:
Hi Def
Half A Tooth
Oxygen
Office Buildings
Star Cry

Side B:
Sweets
Hairspray Run
Save The Song
Cocoon
L.A. Street Riff