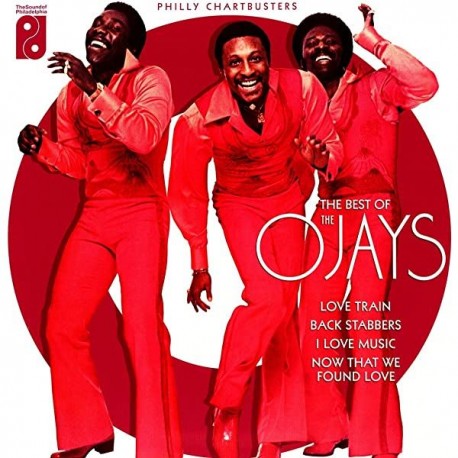 The O'Jays - Philly Chartbusters: The Best of

There are times in popular music where an unstoppable force truly meets an immovable object and a strange, unique, alchemy occurs. This is true of the union between the O'Jays (Eddie Levert, Walter Williams & William Powell) and producers and writers Gamble & Huff. The power of the moment in 1972 when the group broke through into the US and UK mainstream with a series of memorable hits still burns bright. During their years on Philadelphia International Records (PIR), they released some of the greatest and most successful soul standards of all time. 'Love Train', 'Put Your Hands Together', 'Now That We Found Love', 'Backstabbers', 'For the Love of Money', 'I Love Music'. there's a seemingly endless supply of hits in the O'Jays' PIR songbook, all here on this 2LP of classics. Success was not instant for the group that started out recording as The Mascots in Cincinnati in 1961. "It's been a long road for the O'Jays, but their music has travelled beautifully," Blues & Soul wrote in 1973, but then the hits started flowing. The O'Jays also notched up 8 Billboard Top 20 albums to match their success in the single charts around the world. Inducted into The Rock and Roll Hall of Fame (2005) and Grammy Hall of Fame (two-time inductees: 'Love Train' - 2006; 'For The Love Of Money' - 2016) their status as musical titans is in no doubt, but there's so much more to them than smash hits. These are the O'Jays and this is some of the most beautiful soul you will ever hear, the absolute cream of their Philadelphia International years. 'Philly Chartbusters - The Best of the O'Jays' is released on 2LP Gatefold through United Souls, a Snapper Music label.

Side A:
Love Train
992 Arguments
Put Your Hands Together
Now That We Found Love

Side B:
Back Stabbers
For the Love of Money
I Love Music
Livin' For the Weekend

Side C:
Message in Our Music
Darlin' Darlin' Baby (Sweet, Tender, Love)
Use Ta Be My Girl
Brandy

Side D:
Put Our Heads Together
My Favorite Person
I Just Want To Satisfy You
Summer Fling