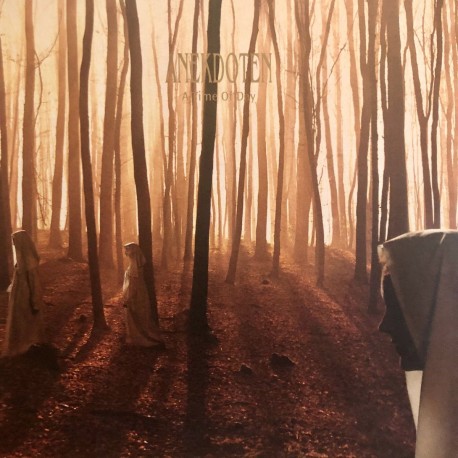 Anekdoten - A Time Of Day

The 2017 fifth album from the Swedish progressive rock band Anekdoten. Recorded at Rommar studio in the Swedish archipelago in the November 2006, the band was aiming for more complex and richer song writing than before. Most of the songs were demoed and arranged well before the recording session which used vintage organs and synths to expand the sounds. The late Gunnar Bergsten, famous for playing on Bo Hansson's 'Lord Of The Rings' album, played flute on '30 Pieces', musically considered one the highlights in Anekdoten's career. The band had to mix the album in a studio they were not used to and were never happy with the overall sound. Main man Nicklas Barker says, "We have re-mastered it twice (in 2007 and 2012), but still not with the result we wanted. With this mastering by Hans Fredriksson in January 2020 we finally feel that the greatness of this album revealed." "As always, there are great big lashes of majestic 'tron all over everything. The songs are strong, ranging from the pounding dark prog numbers to delicate acoustic songs like 'Stardust and Sand' and 'Prince of the Ocean'. A stew of psychedelic dark prog of the highest order from an incredibly consistent band." Allister Thompson, Prog Archives "They're masters at the art of shifting on a dime from brooding solemnity to full throated and grinding rock, though they can also take it down with 12-string and VCS synth musings like 'Every Step I Take' (sounding like Pink Floyd) or the lazy Mellotron-flavoured waltz, 'Prince of the Ocean'. Canterbury flavoured prog is even evoked in the rocker 'In for a Ride'. Paul Hightower, Expos Magazine Remastered for LP by Hans Fredriksson, 'A Time of Day' is released on Kscope on 180g vinyl.