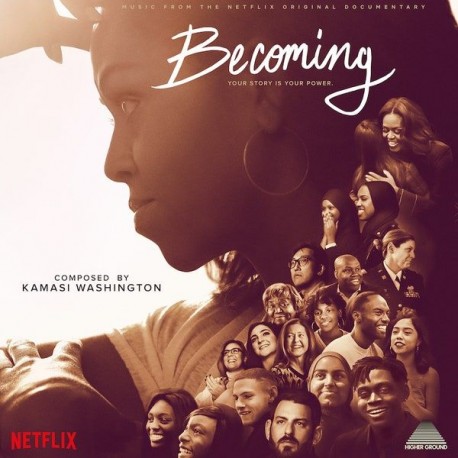 Kamasi Washington has released his original score for Becoming, director Nadia Hallgren and Higher Ground Productions' documentary profiling First Lady Michelle Obama, which is streaming on Netflix now. The score features new original music Washington-whom Hallgren asked to join the project very early in its development-composed for the film as well as selections from his catalogue.

"Working with Kamasi Washington on the musical score for Becoming was a dream come true," says Hallgren. "Not only is Kamasi a masterful musician, he also has a unique sensitivity that he pours into his music. His music reaches deeply into your soul. Mrs. Obama loves music, and when I read the line in her book 'And heaven, as I envisioned it, had to be a place full of jazz,' I knew immediately Kamasi was the artist that could interpret her experience musically. His sound is contemporary and timeless, a magical fit to her story."

Side A:
Shot Out Of A Cannon
Becoming
Take In The Story
Southside V.1
Dandy
The Rhythm Changes
Song For Fraser
Announcement

Side B:
Detail
Fashion Then And Now
Provocation
Connections
Looking Forward
I Am Becoming
Southside V.2