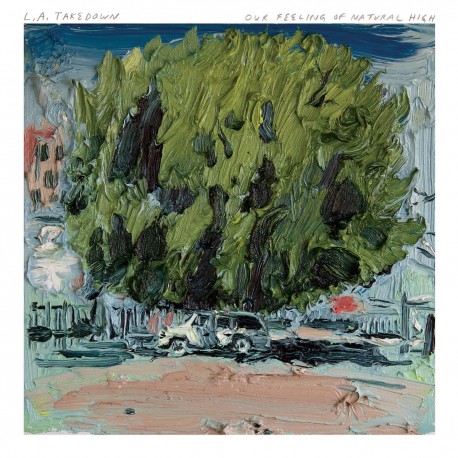 When L.A. Takedown hovers over one's ear hairs for the first time, so much is communicated without a word-there are patient, capable hands at the wheel as one phantoms through a neon Los Angeles of the mind, a Los Angeles that only three harmonized electric guitars can conjure, with a sunset so infinitely variegated in color that only synthetic washes of synth could serve as a fainting couch. Studio magic dust seems to drip off these android dreams projected against the wall-in person it defies logic that such a sound is coming from humans, but, watching their hands, it's unmistakable-these are calm warriors sallying forth these sweeping, swooning epics, crowned with triumphant tripartite thunderbolts of wail. For a few fleeting moments, things seem right with the world; a hero has prevailed, the race was won by a hair, the unmanned drones levitate and strafe the coast, rending the coral sky with a psychic boom, shaking loose a few palm fronds and setting off some car alarms but otherwise leaving the sprawl unchanged and teeming. While produced and performed by Aaron M. Olson, Our Feeling Of Natural High was engineered and mixed to glossy perfection by Jason Quever and it benefits greatly from the seamless contributions of John Herndon, Jason Quever, Marcus Savino, Miles Wintner, Mose Wintner, Nicholas Krgovich and The Musical Tracing Ensemble. We're even treated to a city-hum lullaby to humanity as a nightcap, with Nedelle Torrisi and Yellow Magic Orchestra's Yukihiro Takahashi on vocals, truly a mint on the pillow of this fantastic soundscape. For fans of Michael Rother, Top Gun, later Tangerine Dream, convertibles and long walks on the beach.

Side A:
There Is A Drone In Griffith Park
Sunset Report
Tokyo to Kyoto
Moved

Side B:
The Swimmer
Hugs On The Beach
Top Down, Heater On
When It's Over