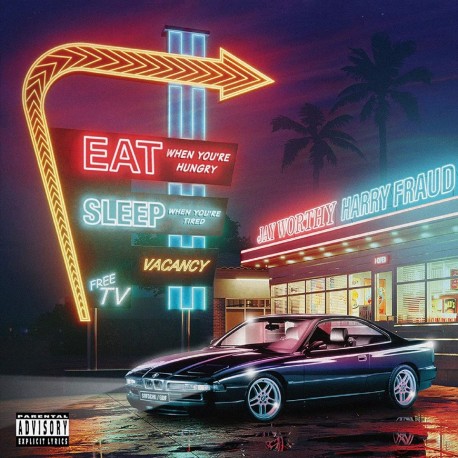 Jay Worthy, the LNDN DRGS front man, originally hails from Compton and -- along with frequent collaborators like Kamaiyah and G Perico -- he's part of a new crop of rappers that keep the sound and feel of the '90s G-funk era alive However, after moving to NYC for a period of time he linked up with NYC producer Harry Fraud (Smoke DZA, Curren$y, Meyhem Lauren, French Montana, etc). Fraud is a real New York kinda guy, but it turns out he's also really good at crafting the kind of West Coast-style bounce that Jay Worthy is perfect for. Initially, Worthy and Fraud got together to record the songs 'Uncle Brad' ft. ElCamino and 'Backpage Freestyle' ft. Grafh & Daytona, both of which are included on 'Two4One', Worthy's first solo project, released as a series of two single collaborations in 2020, and via Get On Down on both colored and black vinyl. However, these bi-coastal collaborators didn't stop there and they soon found themselves recording enough songs for an entire project of their own, with Worthy penning his lyrics in Harry's Brooklyn based studio at the same time Harry was producing the music for what became 'Eat When You're Hungry, Sleep When You're Tired', their seven song project (EP) featuring Larry June, Guapdad 4000, ElCamino (Griselda), G-Perico, Band Gang Lonnie Bands and Big Body Bes. Worthy & Fraud are now dropping 'Eat When You're Hungry, Sleep When You're Tired' and the instrumentals for all seven tracks on a limited edition purply-swirl colored vinyl, with amazing artwork.