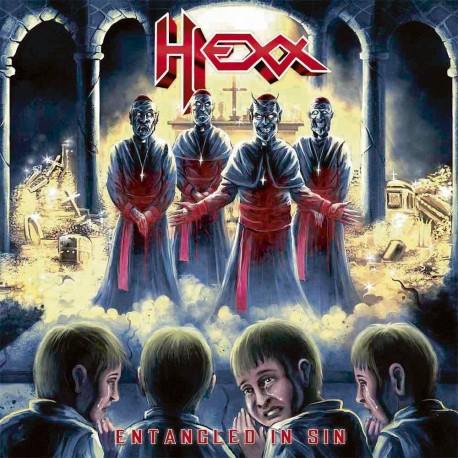 The infamous Bay Area has a long and extensive metal history. Responsible for many truly groundbreaking acts (just think of Exodus, Testament, Forbidden, Heathen or Blind Illusion) for over three decades now, the city by the bay has spawned some of the most innovative and exceptional talent there is. Hexx, one of the third-generation power metal bands emerging from San Franciso, were originally formed in late 1984. Hexx were signed by Century Media Records. The following album, 1991's "Morbid Reality", marked Hexx's evolution from a more or less traditional speed/power metal band to a brutal, technically-inclined thrash/death metal outfit. Now in 21st Century the Mark III incarnation of Hexx is returning with a brand new studio album entitled "Entangled In Sin" that is much closer to Hexx's power metal roots than to the band's brutal thrash/death metal period. It's a classic US Metal album, going back to the glory days of the 1980s (albeit with a much stronger production).

Side A:
Watching Me Burn
Entangled In Sin
Vultures Gather Round
Beautiful Lies
Power Mad

Side B:
Internal Enemy
Strive To The Grave
Touch Of The Creature
Wise To The Ways Of The World
Over But The Bleeding