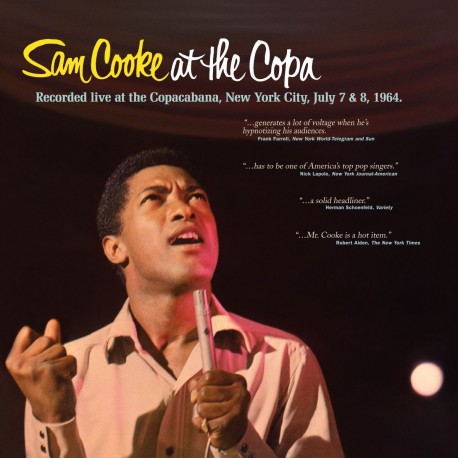 In 1964, when this concert at New York City's legendary Copacabana night club was recorded, Sam Cooke was at the top of his game, having charted numerous times with his unique blend of pop and soul. The success doesn't seem to have gone to his head, though: he sounds relaxed and conversational throughout this intimate performance. Accompanied by a band that includes Bobby Womack on guitar, Cooke brings his R&B tendencies further to the fore than on his immaculately produced studio work. He moves deftly through his own hits, like "You Send Me" and "Twistin' The Night Away," but it's on the folk songs "If I Had A Hammer" and "Blowin' In The Wind" that he really stretches out, proving himself a gifted interpreter unbound by stylistic constrictions. At The Copa is an essential part of the Cooke canon.

Side A:
Opening Introduction
The Best Things In Life Are Free
Bill Bailey
Nobody Knows You When You're Down And Out
Frankie And Johnny
Medley: Try A Little Tenderness / (I Love You) For Sentimental Reasons / You Send Me

Side B:
If I Had A Hammer (The Hammer Song)
When I Fall In Love
Twistin' The Night Away
Band Introductions
This Little Light Of Mine
Blowin' In The Wind
Tennessee Waltz