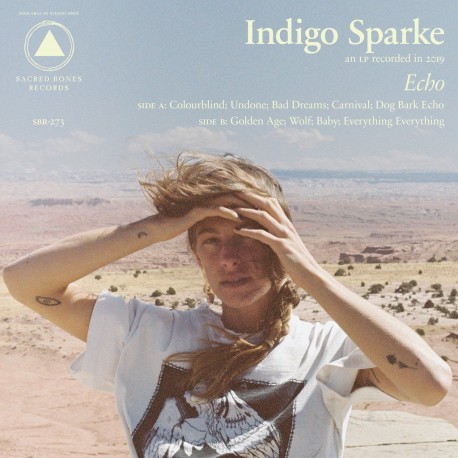 Australian folk artist Indigo Sparke brings her deeply personal lived experiences to her music, highlighting the spaces between the polarity of softness and grit. Pulling her experiences of addiction, of healing, of queerness, of heartbreak, of joy, of connection, of the softness and of the grit alchemising it all into tenderness through her music, she conjures up a myriad of feelings that is undeniably potent. Indigo taught herself to play guitar in her early twenties. Over the next few years, she established herself on the Australian music scene, and released her EP Night Bloom in 2016. Indigo's career continually bloomed, opening for Big Thief on the Australian dates of their 2017/2018 tour, and then was invited to play at South by Southwest 2019. There, NPR's Bob Boilen was first taken by Indigo, writing that her lyrics "both cut hard and comfort" and that her performance "balanced heavy, reverb-drenched verses with moments of airy and acoustic whis- pers." Sparke began 2020 with a February Tiny Desk Concert at NPR, and had been booked as the opening act for Big Thief's sold-out tour of Australia and New Zealand, including a scheduled performance at the Sydney Opera House before Covid-19 saw everything change. It was in 2019 that Indigo lived and travelled across America, in places like NYC, Minneapolis, Topanga, Taos, in many hotel rooms and amidst the vast stretching landscapes on the never ending highways, channelling her creative energy into the completion of her latest album, Echo. Echo was recorded between LA, Italy and New York, co-produced by Sparke, Adrianne Lenker (of Big Thief), and Andrew Sarlo (producer of Big Thief, Nick Hakim, Hovvdy, Courtney Marie Andrews, Bon Iver, Hand Habits, Active Child). The record was completed at Figure 8 Studio in New York City, studio of musician Shahzad Ismaily. Phil Weinrobe (producer/engineer for Leonard Cohen, Damien Rice, Adrianne Lenker, Buck Meek, JFDR, and Lonnie Holley) engineered and mixed the album.

Side B:
Golden Age
Wolf
Baby
Everything Everything