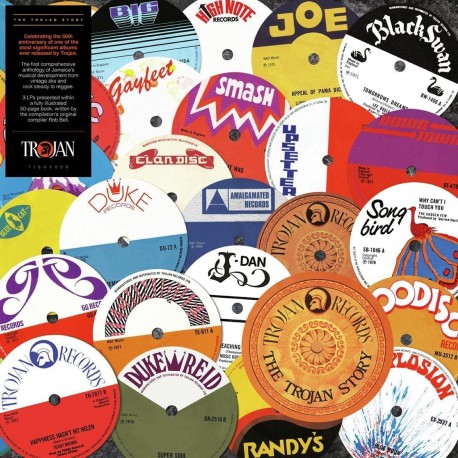 One of the most significant collections in Trojan's immense catalogue, The Trojan Story album dramatically changed the perception of Jamaican music among the general British public outside of the country's Afro-Caribbean population.

Prior to its release in 1971 there had never been an attempt to present a comprehensive anthology of the island's musical development, with vintage ska, rock steady and reggae widely regarded as obsolete and of precious little merit. The treble disc set, which became an instant best-seller, had been the brainchild of Trojan's label manager and Black Music fan, Rob Bell, who, assisted by Trojan stalwarts, Dandy, Webster Shrowder and Joe Sinclair, produced arguably the most significant Jamaican music retrospectives of all time.

Now, 50 years following its original release, this hugely influential album has been revisited by Bell, along with reggae musician, Rusty Zinn, who have succeeded in improving what was already an almost perfect collection. Presented in the original eye-catching artwork, the set is further enhanced by a highly illustrated 50-page booklet in which Bell relates the stories behind the release and the 50 tracks featured on the compilation.

Side E:
Musical Train Roy Shirley
Do The Beng Beng Derrick Morgan
Way Of Life - Lynn Taitt & The Jets
Second Fiddle Tommy McCook & The Supersonics
People Funny Boy Lee Scratch Perry
Ive Got To Get You Off My Mind The Tennors
Do The Reggay The Maytals
Nana The Slickers

Side F:
Tell Me Baby Delano Stewart
Mama Look Deh The Reggae Boys
Hong Kong Flu The Ethiopians
Pressure Drop The Maytals
Them A Laugh And A Ki ki The Soul Mates
Walking In The Rain The Melodians
Satisfaction Carl Dawkins
Black And White The Maytones
Rasta Never Fails The Charmers