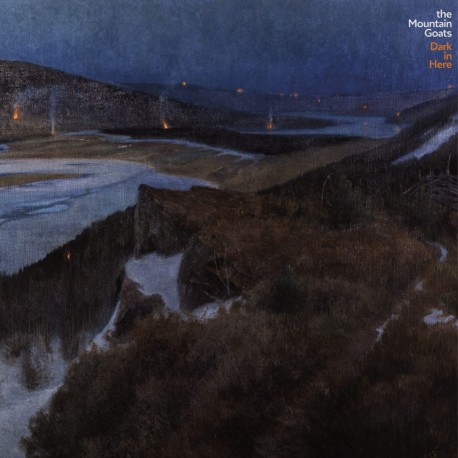 LIMITED 'HIGH NOON SOMEWHERE' BLUE COLOURED VINYL At last it can be told: the story of how, when the Mountain Goats got together in early March, 2020, it was to make not one album, but two. That's how many keepers our superhumanly prolific frontman, John Darnielle, had come up with since we'd recorded In League With Dragons in Nashville with our old friend Owen Pallett back in 2018. The idea this time around was to work with Matt Ross-Spang, the dashing Memphis wunderkind who'd engineered that album and charmed us all with his gentle wit and old-school savoir-faire. (It's hard not to be won over when you go to record and the voice coming through the headphones drawls, "You ready, Bubba?") Matt's pitch was for us to spend a week at Sam Phillips Recording, his home base in Memphis, followed by another at the equally storied FAME Recording Studios down in Muscle Shoals, Alabama, a plan that dovetailed nicely with John's notion of corralling these songs into two complementary batches, a sort of yin and yang, one light, one dark. The Memphis album-Getting Into Knives, which came out last October-would be brighter, bolder, marked by rich and vibrant hues; the Muscle Shoals one-Dark in Here, set for release on June 25-quieter, smokier, but more deeply textured and intense. Peter Hughes - Rochester, March 2021

Side A:
Parisian Enclave
The Destruction Of The Kola Superdeep Borehole Tower
Mobile
Dark In Here
Lizard Suit

Side B:
When A Powerful Animal Comes
To The Headless Horseman
The New Hydra Collection
The Slow Parts On Death Metal Albums

Side C:
Before I Got There
Arguing With The Ghost Of Peter Laughner About His Coney Island Baby Review
Let Me Bathe In Demonic Light