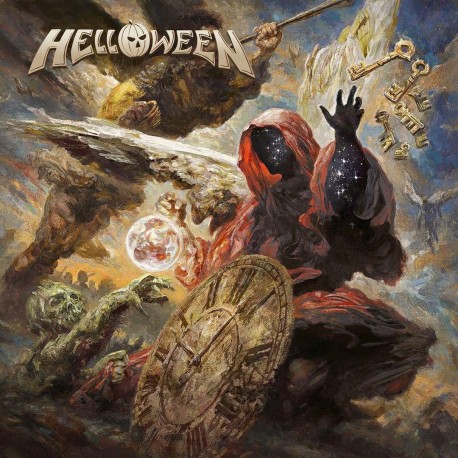 Triple vinyl edition on black vinyls with one side with special hologram effekt.

Please stick together, this was the ardent wish of thousands of fans calling out to Andi Deris, Michael Kiske, Michael Weikath, Kai Hansen, Markus Grosskopf, Sascha Gerstner and Dani LÃ¶ble during the Pumpkins United World Tour - and their dream has come true. With their 2021 album, simply titled Helloween, the band opens a new chapter after 35 years of a glorious career. The future of one of the most influential German metal bands from now on will feature three singers. Originally planned for the live performances only, it was the birth of a unique seven piece metal alliance. Synergy, energy and creativity, these were the main elements on this record. We used old school recording engineering from the 80's merged with the current Helloween-vibe and here we are: more than 35 years of heavy metal experience on one record, says Gerstner. Besides the line-up and the unique interaction of world class front men - this is what makes the album outstanding: it is a precise time travel through all phases of the band's history, going back to the roots but at the same time at the speed of light towards the future. The base of this milestone album was already erected in the studio: using the original drum kit of Ingo Schwichtenberg, the recording was done with the same modulators at the Hamburg Home studios where back then Master Of The Rings, The Time Of The Oath and Better Than Raw were recorded. Completely analog and under the eyes of long term producer Charlie Bauerfeind and co-producer Dennis Ward. With all this brand new material an album has been created, an album that is set apart from the digital mainstream and offers a complete metal universe within 12 songs. It also shows the essence of the band was never more solid. This is the beginning of something big - here comes Helloween

Side A:
Out For The Glory
Fear Of The Fallen

Side C:
Rise Without Chains
Indestructible

Side F:
Down In The Dumps
Golden Times
Save My Hide