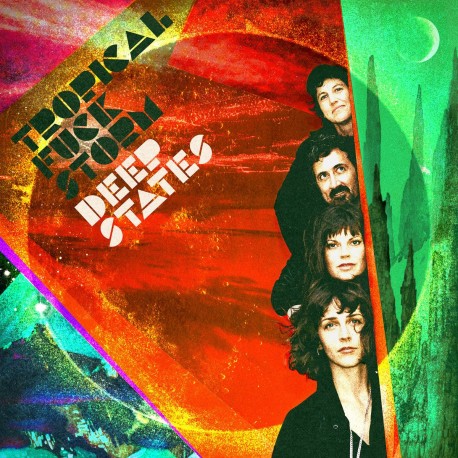 Most of us have lived some inner Tropical Fuck Storm over this past year and a half. Gareth Liddiard, frontman for the Aussie band with a name perfectly suited to the times, was like the rest of us in feeling the malaise. On not writing any new songs for the first six months of the global shutdown, he says, "Why would I? Everything seemed pointless." Even for a band that's made a career out of crafting songs attuned to political and social crisis, there was a new bleak in the air, what the band calls "give-a-fuck fatigue." A Laughing Death in Meatspace and Braindrops, Tropical Fuck Storm's 2018 and 2019 records, probed the destructive force of consumerist culture, the imperialistic reaches of the United States, the threat posed by a warming planet. The band wedded a brave new worldview to an ever lively acid punk sound. Which made you sometimes despair. While still wanting to dance.

Deep States mines familiar ground as well as new cultural terrains, while digging deeper into the subjective state of contemporary panic. Over the last five years, you didn't have to be conspiratorial to see the conspiracies everywhere you turned; and Liddiard, Fiona Kitschin, Erica Dunn, and Lauren Hummel, the Tropical Fuck Storm collective, know how to make friends with the strange. They invite our paranoia and fatigue. "It's a permanent state," Liddiard sings, "war made the State, the State made war, what's the point of worrying 'bout it anymore?" The band chronicles weird adventures in statecraft and surveillance, ponders the global infatuation with resurgent fascisms. Tropical Fuck Storm shines an incandescent light on a world in which corporate media, bad-faith leaders, and charismatics of all stripes lose the ability to recognize their own deceptiveness.

Side B:
The Donkey
Reporting Of A Failed Campaign
New Romeo Agent
Legal Ghost
The Confinement Of The Quarks