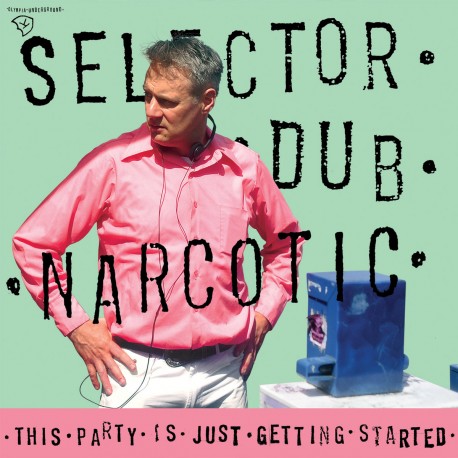 Selector Dub Narcotic - This Party Is Just Getting Started

The debut album by Selector Dub Narcotic is an exercise in ecstatic genre-smashing, blending and up-ending. Calvin Johnson of the K label and such Olympia combos as Dub Narcotic Sound System, Beat Happening, Halo Benders and most recently The Hive Dwellers has been working under the nom de plume Selector Dub Narcotic since founding the Dub Narcotic Studio in 1993. This Party Is just Getting Started is a collaboration with NW hip hop producer Smoke M2D6, who first began working with K producing the All Your Friend's Friends [KLP255] compilation. As a member of the Oldominion crew Smoke M2D6 has produced almost every major hip hop artist in Washington and Oregon. This Party Is just Getting Started began with the song "All for the Sake of Rhymin"' (which samples K artist Mah jongg) and snowballed into an entire album of dance pop garage soul with Calvin's trademark melodica wafting overall.

Tracklisting:
Side A:
Hotter Than Hott
Baby's Got Oi
All Thumbs
I Need Sum
The Party's Over
What The ... ?
Carry The Sun

Side B:
All For The Sake Of Rhym In'
Recreational Ironing
Let's Spend Some Time Together
And Stuff Like That There
Lonely Planet Puss'n'Boots
Docu Drama
Every Woman