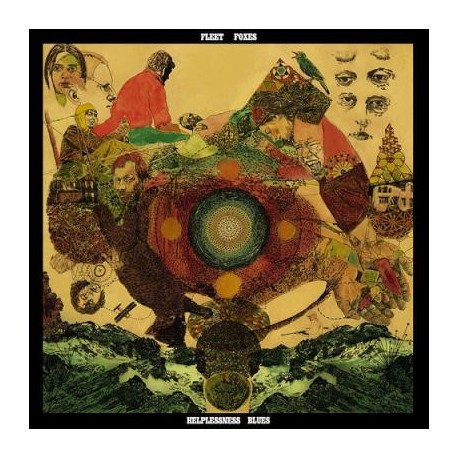 Recording for Helplessness Blues began in April 2010 at Dreamland Recording in Woodstock, NY and continued off and on through November of that same year back in Seattle at numerous studios, including Bear Creek, Reciprocal Recording and Avast. Like very nearly every worthwhile thing, making this album was not easy; it was a difficult second album to make. Drawing inspiration from folk/rock from about 1965 to 1973, and Van Morrison's Astral Weeks in particular, Helplessness Blues sees Fleet Foxes heighten and extend themselves, adding instrumentation (clarinet, the music box, pedal steel guitar, lap steel guitar, Tibetan singing bowls, vibraphone, etc., along with more traditional band instrumentation), with a focus on clear, direct lyrics, and an emphasis on group vocal harmonies.

We have it on good authority that the album is called Helplessness Blues for at least a couple of reasons. One, it's kind of a funny title. Secondly, one of the prevailing themes of the album is the struggle between who you are and who you want to be or who you want to end up, and how sometimes you are theonly thing getting in the way of that. Having heard Helplessness Blues, we mean to get out of its way.

Side B:
Battery Kinzie
The Plains/Bitter Dancer
Helplessness Blues

Side C:
The Cascades
Lorelei
Someone You'd Admire