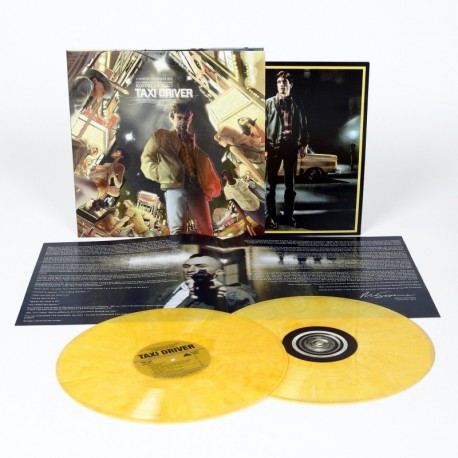 Featuring an all star cast including Robert DeNiro, Jodie Foster, Cybill Shepard, Albert Brooks, and Harvey Keitel, TAXI DRIVER is regularly cited by audiences, critics, and film directors alike as one of the greatest films of all time. The music by legendary composer Bernard Herrmann was his final score before his death on December 24th, 1975.

Nominated for four Academy Awards, including Best Picture, the film was considered "culturally, historically, and aesthetically significant" by the US Library of Congress and was selected for preservation in the National Film Registry in 1994.

Waxwork Records is pleased to present TAXI DRIVER as a deluxe double LP featuring the complete film score by Bernard Herrmann on vinyl for the very first time, ever. Also included is the complete and remastered original 1976 soundtrack release.

Tracklisting:
Side A:
Main Title
Thank God For The Rain
Cleaning The Cab
I Still Can't Sleep / They Cannot Touch Her (Betsy's Theme)
Phone Call / I Realize How Much She is Like The Others / Strange Customer / Watching Palantine on TV / You're Gonna Die in Hell / Betsy's Theme / Hitting The Girl
The .44 Magnum is a Monster

Side B:
Getting in Shape / Listen You Screwheads / Gunplay / Dear Father & Mother / The Card / Soap Opera
Sport & Iris
The $20 Bill
Assignation Attempt / After The Carnage
A Reluctant Hero / Betsy / End Credits