> Vinyl>Gil Scott-Heron - Revolution Will Not Be Televised 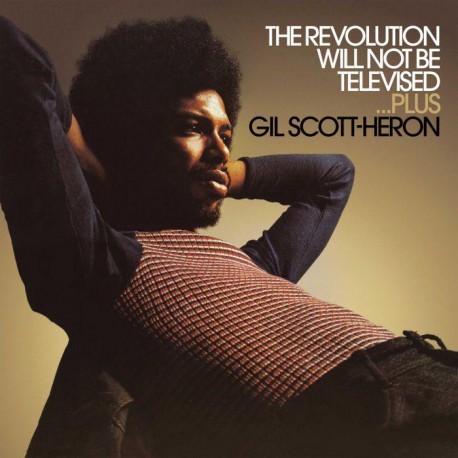 Gil Scott-Heron - Revolution Will Not Be Televised

Gil Scott-Heron never had a pop hit single; he was more important than that. With 'Johannesburg', 'Home is Where The Hatred Is' and 'The Revolution Will Not Be Televised' he wrote songs that resonated beyond the world of disposable chart-toppers. That's not to say he didn't have success, and 1974 was a very good year for him. The album "Winter In America", released on Strata-East, spawned the radio hit 'The Bottle' and several cover versions. Former Columbia Records boss Clive Davis was impressed and made Gil, Brian Jackson and the Midnight Band the first signing to his Arista label later in the year. The streak continued into 1975 when their first Arista album, "Midnight Band: The First Minute Of A New Day", made the jazz, R&B and pop charts. Gil was certainly making a name for himself.

Towards the end of 1974, Gil's former label, Flying Dutchman, put out a compilation of tracks from his first three albums. "The Revolution Will Not Be Televised" was no hastily put together cash-in. Instead it became the primer for what many would describe as Gil's best work. From its striking Charles Stewart cover shot and lavish packaging, it was clear time and effort had been made to get the album right. From the incendiary polemicism of the title track through heart-wrenching contemplations on modern life such as 'Pieces Of A Man' and 'Did You Hear What They Said?', and back to the anger of 'Whitey On The Moon', it captured perfectly what his first three albums were about, revealing not just a performer but a writer every bit as poetic as Bob Dylan. The skill of his collaborators, most notably co-writer Brian Jackson and producer Bob Thiele, and musicians of the calibre of Hubert Laws, Bernard Purdie and Ron Carter, all helped to showcase his songs to their full splendour.

Tracklisting:
The Revolution Will Not Be Televised
Sex Education: Ghetto Style
The Get Out Of The Ghetto Blues
No Knock (without intro)
Lady Day And John Coltrane
Pieces Of A Man
Home Is Where The Hatred Is
Brother (without intro)
Save The Children
Whitey On The Moon (without intro)
Did You Hear What They Said?