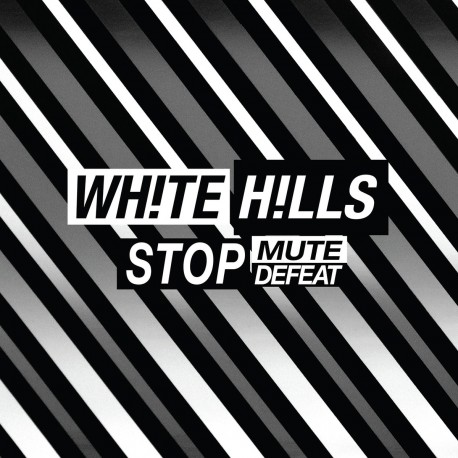 The dismal realities, political or otherwise, that are part of our modern world naturally influence our creative voices. It is in this context that White Hills re-evaluated their approach to creating a new album. Having continually refined their sound, pushing the boundaries of psychedelic music, White Hills flipped the script on Stop Mute Defeat. Dave W. and Ego Sensation have brazenly produced an industrially-charged record that pulsates unlike anything they've released before. Hard-line, gritty, and intellectually engaged, Stop Mute Defeat is a New York record through and through. With this in mind, White Hills drafted Martin Bisi (Sonic Youth, Brian Eno, Afrika Bambaataa) to mix. White Hills recorded with Bisi on two of their previous releases, Frying On This Rock in 2012 and its follow-up So You Are...So You'll Be, however Stop Mute Defeat is the first time they worked with Martin "The Beast" Bisi in control of the mixing board. A native New Yorker who made his name in the city's early hip-hop and no-wave scenes, Bisi was attracted to White Hills' new material for its distinct early-80s Mudd Club feel. A dance hall, drug den, and bar, the Mudd Club was one of New York's legendary haunts in the late 1970's. As a center of a distinct art scene the club served as a major influence for White Hills and Stop Mute Defeat's sound.