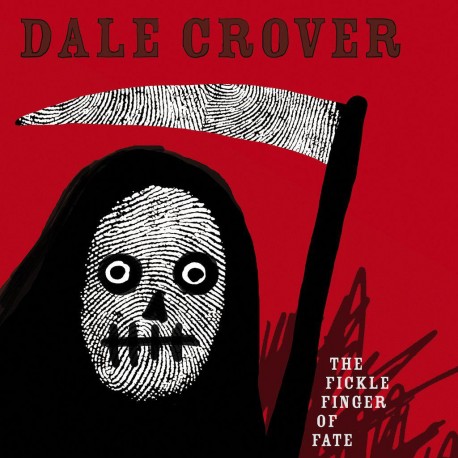 Introducing, the debut solo album from the enigmatic legend that is Dale Crover. Amongst his 30+ year career as one half of the essential Melvins roster, Crover has contributed to countless albums ranging from platinum-plated classics (ahem, Nirvana) to seminal cult LPs. However, up until this point Crover's solo efforts have only appeared once in a blood moon, limited to the Melvins 1992 KISS-themed solo EP, and a couple intermittent 7" releases. The Fickle Finger Of Fate marks Crover's first calculated, full length solo effort. But let's be clear: this is not a drum record. The album features a perplexingly diverse batch of songs that recall the best moments of the Melvins catalog. With 90% of all instruments played by Crover, and recorded by longtime engineer Toshi Kasai, the album is sure to tickle the temporal lobes of Melvins devotees. Sonically, the album ranges from slightly microwaved heaviness, to surprisingly chill Pink Floyd-tinged ballads, to Max Roach-meets-Throbbing-Gristle drum experimentations, to good old fashioned Andy Kaufman-style head-fuckery. Though consistently otherworldly, The Fickle Finger Of Fate is surprisingly approachable â‚¬" dare we say, catchy. But even at it's most anthemic, you won't be able to shake the feeling that a sinister ambience is hovering just beneath the surface.

Side B:
Slide On Up
Big Uns
Prismo
Giant Hunka Cake
Fickle Finger Of Fate
Thunder Pinky
Horse Pills
There Goes The Neighborhood
Our Supreme Leader
I Found The Way Out
Vulnavia