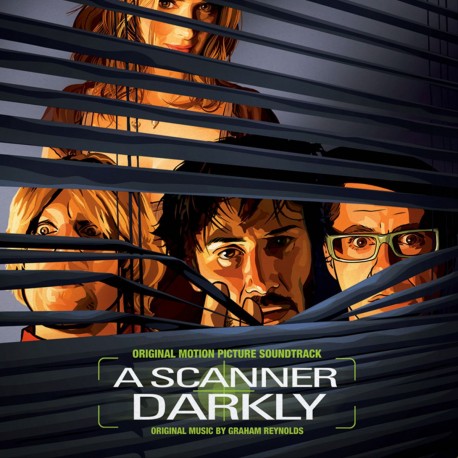 A left field musical score was needed to ensure that everything wasn't as it seemed. Graham Reynolds works in extremes, he's collaborated with DJ Spooky, the Austin Symphony Orchestra and with live film collage creator Luke Savisky. More importantly his Golden Arm Trio are never three and never the same people twice. For the movie he created short sound bytes - a surf-like instrumental, a country-tinged breather, the sound of stuttering insects crawling through your hair. The resultant soundscape is itchy and scratchy, full of mood swings and musical metaphors, an ever changing and unpredictable set of highs littered with reflective undertones and occasional soft, almost super numb realities. "A tactile, emotional resonance often missing in contemporary scoring."

Tracklisting:
Side A:
7 Years From Now
Aphids
Swallowed Up In Victory
Strawberry Pie
The Dark World Where I Dwell
Sex, Beer And Pills
A Farm Near The Mountains
Bug-Bite Squared
Pose As A Nark
Do You Like Cats?
A Scanner Darkly
Abrasocaine

Side B:
Part Of The Plan
Are You Experiencing Any Difficulties?
Your Move, Peterbilt
Room 203
Escorted To The Bright Lights
You'll See The Way You Saw Before
A New Path
Little Blue Flowers
Darkly Mix
Call Sign/Aleph:/