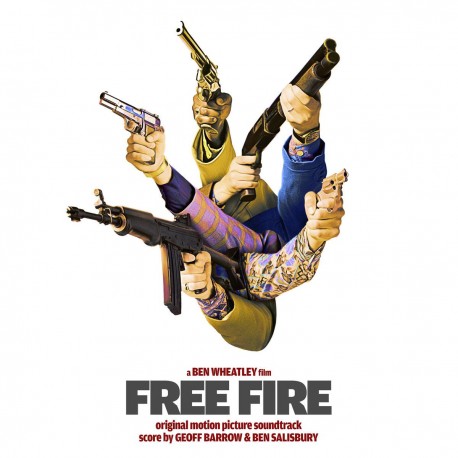 Geoff Barrow & Ben Salisbury return to score Ben Wheatley's 1970s based epic shoot-out Free Fire, executively produced by Martin Scorsese. The soundtrack was compiled by Ben Wheatley himself and this version features all score tracks by Barrow & Salisbury, dialogue from the film and all license music used in the film (Creedence Clearwater Revival, John Denver, The Real Kids). Free Fire sees Barrow and Salisbury take a huge directional curve away from their intense, synth-based Ivor Novello award winning score for Ex Machina, with the composers curating a prog-rock, free-jazz, psychedelic journey influenced by bands such as King Crimson, Camel and Magma and tips its hat to the Lalo Schifrin thriller genre scores of that era. Geoff Barrow: "It was brilliant to work with Ben Wheatley, Amy Jump and the Rook Films crew again after my experience with them for High Rise. Creating a pub prog band proved great fun for Ben Salisbury and I as it needed to represent the characters in the film that were mostly loose cannons and lunatics and we needed to try and reflect them in all their idiosyncratic glory." Ben Salisbury: "We wanted to create an old fashioned soundtrack album, where the listening experience reminds you of the fun and excitement of watching the film. So we've included on the album choice cuts of the most important aspects of Free Fire's soundtrack - the amazing symphony of gunshots created by sound designer Martin Pavey, and the brilliant dialogue you hear in between the gunfire." The score features musical luminaries Clive Deamer (Radiohead/Portishead), Billy Fuller (Robert Plant/Beak), Jason Hazeley (Portishead) and Ross Hughes (Portishead), and Jerry Crozier-Cole (Pee Wee Ellis)