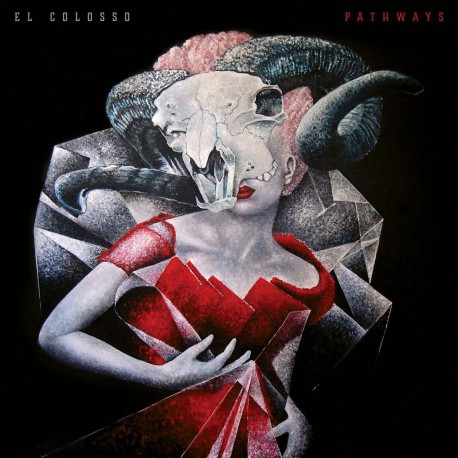 EL COLOSSO is the coming together of four heavyweights of the Melbourne rock scene. Featuring the talents and influences of Benny James Pertzel (Dirty York / King Wolf), Craig Fryers (Mushroom Giant / Dive Into Ruin), Peter 'Red Dog' Hayden (The Hybernators / Free To Run) and Matt 'Koops' Cooper (Bring On The Junta). El Colosso has all the attributes of a true heavy rock band: an arse-kicking frontman with a voice as big as his persona, a wildman lead guitarist, a super-tight rhythm section, impressive harmonies and a song list consisting of all killer, no filler. The El Colosso live show is relentless energy from start to finish. The much-anticipated debut album "Pathways" is a beast. It grabs you as soon as it starts. First track is aptly named, "Doom Boogie". The white noise resolves into a sludge riff cavalcade as if summoning the Dark Lord up from his lair, and then kicks into foot-tapping, head-banging overdriveand it doesn't let up from there. For high-res press photos, click here. Watch "The Hunted"live at The Corner Hotel, supporting THUNDER (UK) The second track is also the band's first single from the album, "Leatherhead"a 4-minute firecracker that pushes you right back into your seat as if the nitro's suddenly been triggered. It's an album brimming with hooks and character. The final track on the album, "Moving Mountains", is a song of epic proportions. Closing out at just under 10 minutes it fittingly book-ends the album, featuring Dave Ferguson (guitarist of Fuck The Fitzroy Doom Scene) sharing the lead guitar parts. The album was recorded at Headgap Studios by Finn Keane, with vocals, additional tracking and mixing by Jez Giddings and Craig Harnath at Hothouse Studios. Mastered by Jack The Bear. "It jumps out of the gate and grabs you by the balls. It's merciless."Jack The Bear "Pathways" is El Colosso's first release since the "Cannonball" EP in 2016, described by Dave 'Higgo' Higgins (Triple M, Distortion) as, "â€¦a MASSIVE wall of fuzz riffs basslines and drums that will kick your balls up through your stomach and out the back of your head. POWERFUL!"