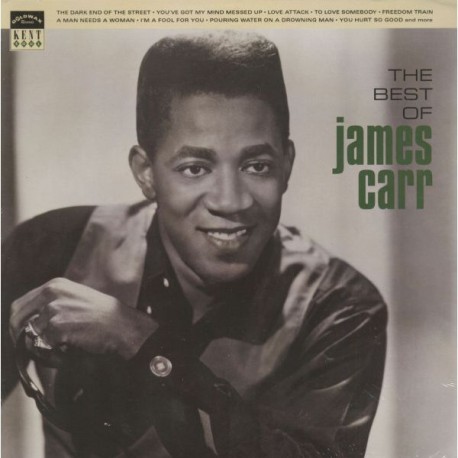 James Carr - The Best Of

Carr had two original album releases in the 1970s but never a "Greatest Hits" collection - so this album, timed to coincide with the 50th anniversary of Carr's best-known and best-loved 45 'Dark End Of The Street', is both long overdue and right on time. Its 14 selections include all of Carr's US R&B and Pop hits from 'You've Got My Mind Messed Up' through to his version of the Bee Gees' 'To Love Somebody', a pair of fan favourites from his original UK albums and several great tracks that have never been released on vinyl in the UK before. As popular with his fans now as he ever was, this collection will keep long-time admirers happy and bring many new ones into the James Carr fan club.

Side A:
The Dark End Of The Street
Love Attack
Freedom Train
Pouring Water On A Drowning Man
A Lucky Loser
You Hurt So Good
Let'S Face Facts

Side B:
You've Got My Mind Messed Up
A Man Needs A Woman
To Love Somebody
I'M A Fool For You
Your Love Made A U-Turn
I Don't Want To Be Hurt Any More
Let It Happen