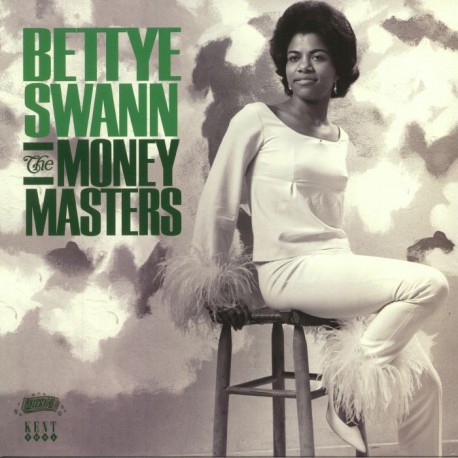 The talented Bettye Swann scored an R&B hit with 'Don't Wait Too Long', her catchy, self-penned, debut single for Money records in 1965. She seemed to have a bright future but the Motownesque 'The Man That Said No' follow-up did not chart, nor did the tougher- sounding 'The Heartache Is Gone'. However Money's perseverance paid off when yet another self-written number 'Make Me Yours', pressed all the right commercial buttons and spent two weeks at the top of the R&B charts in 1967. The song was covered by Z Z Hill and Spencer Wiggins and is an established 60s soul classic. Swann wrote nearly all her own songs at Money, except a cover of the Temptations' 'Don't Look Back' and an exquisite rendition of Sam Cooke's 'A Change Is Gonna Come' which was on her "Make Me Yours" LP and is featured here. An LP was scheduled after the first hit, 'Don't Wait Too Long', but was shelved when the follow-ups failed. That album contained the previously unheard 'The Dance Is Over' and a faster version of 'I Think I'm Falling In Love' compared to the later single; both are deserved inclusions here. The momentum from Swann's big hit carried over to 'Fall In Love With Me' which also charted, but the next 45 was that cover of 'Don't Look Back' which did not add enough to the Temptations' version to earn many sales. Far better was the urgent and unusual 'Don't Take My Mind' which featured mature lyrics but was not far out enough to join in the black psychedelic success of the time. After Money, Swann moved to Capitol, Fame and Atlantic but her song-writing on these releases dwindled and then ceased. This LP is testament to her song-writing as well as her vocal skills.

Side A:
Make Me Yours
You Gave Me Love
Lonely Love
The Dance Is Over
Fall In Love With Me
I Will Not Cry
A Change Is Gonna Come

Side B:
I Think I'm Falling In Love
Don't Take My Mind
The Man That Said No
What Can It Be
The Heartache Is Gone
Don't Wait Too Long
Our Love