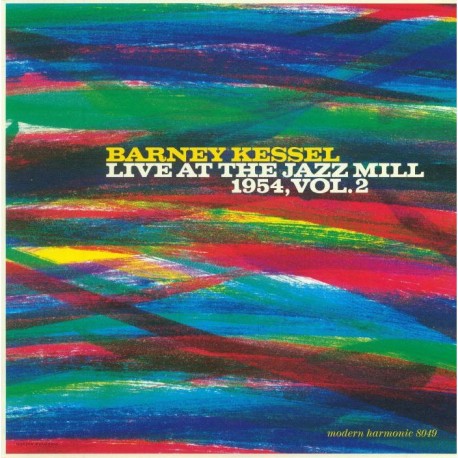 Another set from Barney's stay at the Jazz Mill at the peak of his powers!" Features additional liner notes from jazz author Jim Carlton.By popular demand, we bring you the second volume of Barney Kessel Live at the Jazz Mill in 1954. Thanks to Jack Miller, a young Phoenix audiophile, armed with his Knight-brand recorder, today we can relive and enjoy the artistry of one of jazz's most extraordinary musicians. This is Barney in his salad days when he was topping all the major jazz polls and emerging as one of the most important guitarists of that or any subsequent era. And thanks to the club's owner and amateur bassist Charles Terry and to Kessel himself for allowing young Jack to chronicle the group's performances for posterity.The 1954 Jazz Mill house band consisted of Pete Jolly, who later carved out a career as one of Los Angeles' most sought after jazz pianists and studio musicians, Art Kile whose drive and deft chops kept exquisite time at the drums, and the swinging bassist Gene Stoffell who provided solid vitality in the bottom register. The group had just one day's rehearsal for each featured artist. So the Mill's rhythm section was charged with learning and often creating arrangements for each of the superb jazz talents the club routinely engaged. In addition to Barney Kessel, the Mill would feature such headliners as Chet Baker, Benny Carter, Maynard Ferguson, and many others of the era's best. This record is a marvelous companion to Volume One. The original "goldmine" documented by the avid and prescient Jack Miller was simply too voluminous for just one record. Now this eagerly awaited Volume Two will complement the first release. In addition, it will delight countless musicians, fans, and collectors. And perhaps the club's all-too-brief existence of less than a year renders this already historic recording even more of a rare treasure.