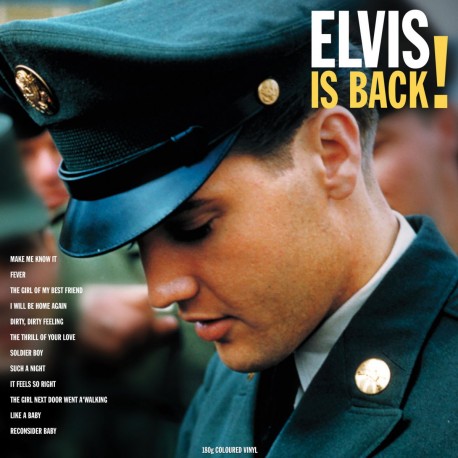 Elvis Presley - Elvis Is Back!

On March 24th 1958, Elvis Presley entered the US Army until March 1960. Back in civilian life there was a lot of pressure on Elvis to come up with the goods - RCA had ordered an initial pressing of one million copies of his first 'comeback' single before the songs were even chosen, let alone recorded. There was a lot to prove when, in March 1960, he entered the RCA recording studio in Nashville and recorded the sessions that resulted in the Elvis Is Back album, which you now hold in your hand.

Side A:
Make Me Know It
Fever
The Girl of My Best Friend
I Will Be Home Again
Dirty, Dirty Feeling
Thrill of Your Love

Side B:
Soldier Boy
Such a Night
It Feels So Right
Girl Next Door Went A'Walking
Like a Baby
Reconsider Baby