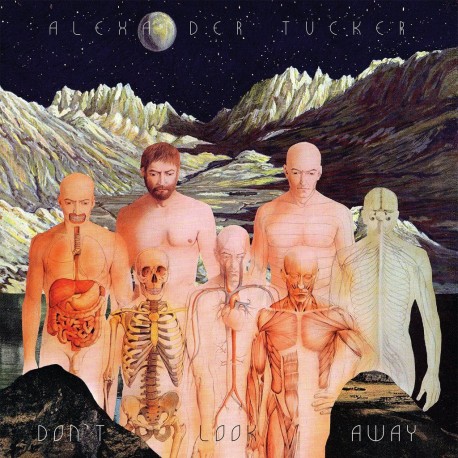 Don't Look Away is Alexander Tucker's third album with Thrill Jockey, completing what Tucker views as the final piece to a trilogy that began with Dorwytch (2011) and Third Mouth (2012). His music brings a distinct otherworldliness, bringing the listener beyond the confines of the physical world, and, much like the album cover alludes to, collages together sound that both brings you outside the atmosphere whilst simultaneously connecting you more closely to the seeds of existence. It is in this direction that Tucker continues to carve a position as one of Britain's most forward-thinking songwriters. Recorded over an extended period in London and mixed in Daniel O'Sullivan's Dream Lion Studio, Don't Look Away emerged during a particularly prolific creative period for Tucker. The album finally came together while Tucker was in Z rich composing for the Schauspielhaus Z rich, and while he was establishing UNDIMENSIONED, his own publishing imprint as an active member of London's wildly creative independent comic scene. As a result, Tucker's wider work feels more present here than on previous recordings and this shows itself often in the lyrics, which range from relationships, including the uncomfortable ones we often have with ourselves, to sci-fi imagery and cosmic horror. The musical landscape of Don't Look Away is illustrated on the cover's hand cut collage, created by Alexander Tucker. Viewing each aspect of his artistic output, be it visual art, comics or music, less as separate disciplines but more of as part of one connected whole - Tucker studied at the Slade School of Fine Art and has always drawn comparison between the layering of paint and the layering of sound - he explains: "The worlds I evoke through sound sit alongside the imagery within my comics, drawing and paintings. There is a melancholia and sadness about the transitory aspects of our earthly lives, alongside a fascination with the beauty and inexplicable nature of existence."

Side A:
Objects
Sisters And Me
Visiting Again
Boys Names
Te Saddest Summer 2
Ghost On The Ledge

Side B:
Gloops Void Give It Up
Behind The Shoulder
A To Z
Citadel
Yesterdays Honey
ISHUONAWAYISHANAWA