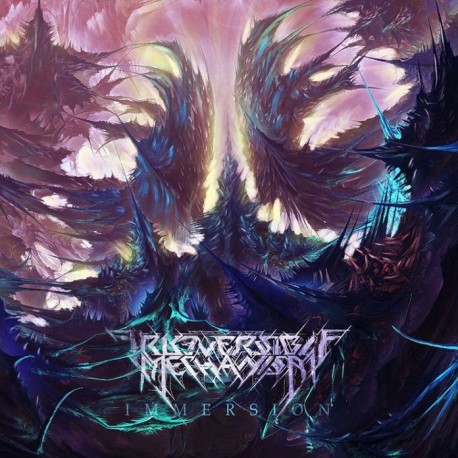 Irreversible Mechanism returns with their boldest and most dynamic offering to date in sophomore album "Immersion". After a strong swell of support following their debut "Infinite Fields", the band withdrew into a chrysalis of forward-thinking musicianship and song-writing. What has emerged is a monstrous statement of progressive death metal no one was expecting. The band's natural fluency of technical performance still pervades throughout, but with this album arrives a sense of space, clarity, melody, and emotion not seen on their debut. The result is a masterful contender amongst the best of today's progressive death metal. Clean vocals appear with tasteful application to balance the powerful growling, vast ambient soundscapes paint an alien world for the band to traverse and destroy through blistering instrumentation, and epic guitar leads soar over the writhing maelstrom of beauty and chaos. Electronic pulses and beats also creep up in interludes which offer a breath of calm and fresh air amongst careful contemplation of everything surrounding the listener, orbiting them through their journey across this cosmic offering. Mixed and mastered by Sami Raatikainen of Necrophagist, and featuring the drumming of Dan Presland of Ne Obliviscaris, the album stands as a monument to the best of technical and progressive death metal. Already dubbed "the new Necrophagist" for their astounding output on their debut, "Immersion" stands as a bold statement, challenging and eclipsing genre heavyweights Rivers of Nihil, Fallujah, and Between the Buried and Me, and ushering in a new era of progressive death metal.

Side C:
Footprints In The Sand
Beyond