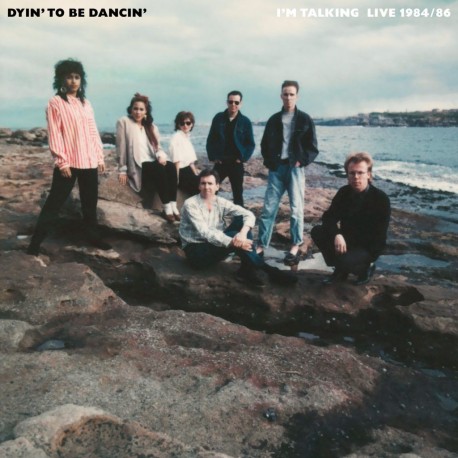 Dyin' to be Dancin' is a document of I'm Talking as a live entity.

"These recordings were never really planned as commercial releases and their existence after so long is partly sheer luck and also a reflection of the excellence of independent broadcasters like Melbourne's 3RRR in preserving our musical culture.

As a live band, we made a huge impact on the Melbourne inner city scene, headlining our first shows and selling them out immediately. All of us, even the extremely young Kate, had been experienced players. Essendon Airport, the band we seemed to grow out of, was an arty, well connected and infamous concern. When we broke up in 1983, people were almost willing us on to do something that went that next step.

That next step was a live band that embraced club music, mixing male and female members, while performing in a way that matched the intensity of the prevailing pub rock, but not afraid to unashamedly embrace pop. We were the kind of band that thought mixing Archie Shepp with the Bee Gees and a touch of punk/funk was the way to go. It was this philosophy that guided the song writing and enabled us a certain original flair...we sounded like a throwback to a time before new wave, particularly the golden period when the public gaze had shifted from disco and the music existed largely just for clubs and dancing...but we always knew that it wasn't 1978. We filtered our musical desires through the reality of what had come since.

Dyin' to Be Dancin', the record's only cover version, was a track we discovered on the late Andrew Maine and Paul Jackson's 3RRR show Blame It On Disco and has become the album's title as a tribute to all the music lovers and volunteers at community stations who helped give birth to our music."

Side A:
When
How Can It Be?
Trust Me
It's Over
Do It To Me

Side B:
Dyin' To Be Dancin'
Here, There And Everywhere
Disko
Take Me As I Am
Someday