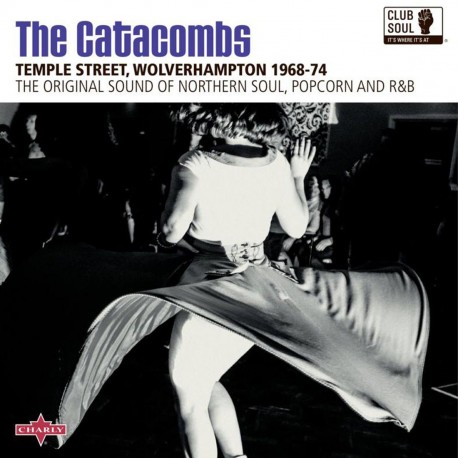 THE CLUB THAT SET THE TEMPLATE FOR NORTHERN SOUL COMPILED WITH FOUNDING DJ CARL DENE AND NEWLY REMASTERED FOR THE CLUB'S 50th ANNIVERSARY. "Before the Catacombs there was Rhythm & Blues, after the Catacombs there was Northern Soul" Carl Dene They called it "the greatest little Soul Club in the land" and, as history tells us, it bridged the gap between the R&B of the Twisted Wheel and the "adrenalin" soul of the Golden Torch. It was an integral part of the rare soul movement and set the template for what became known as Northern Soul! This stunning vinyl album is compiled in association with the club's founding DJ, Carl Dene, and celebrates its 50th Anniversary. It has been newly remastered and pressed to 180g heavyweight audiophile vinyl complete with sleeve notes and a printed inner sleeve

Side A:
P.P. Arnold Everything's Gonna Be Alright
Johnny & Lilly Suffering City
The Ad Libs Nothing Worse Than Being Alone
"Big" Al Downing Medley Of Soul
Bob Wilson Suzy's Serenade
Jerry Williams If You Ask Me (Because I Love You)
Gloria Taylor You Got To Pay The Price
Boot Hog Pefferley & The Loafers I'm Not Going To Work Today

Side B:
Kelly Brothers Love Time
The Showmen The Wrong Girl
The C.O.D.'s Michael
Benny Spellman Lipstick Traces (On A Cigarette)
Bill Black's Combo My Girl Josephine
Buster Brown Fannie Mae
The Sharpees Tired Of Being Lonely
Bobby Bland Call On Me