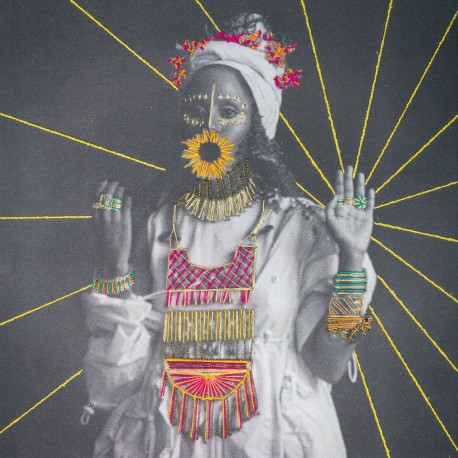 London-based trio Hejira announce their second LP Thread of Gold, released on the 22nd of February 2019 through their own Lima Limo Records. Borne from an astonishing and acutely personal sequence of events, Thread of Gold tells the story of vocalist, bass guitarist and co-songwriter Rahel Debebe-Dessalegne's changing relationship with her homeland of Ethiopia after the death of her father. She took the band with her on a pilgrimage to Addis Ababa, looking to reaffirm her own ancestral roots and cultural identity, and subsequently on a deeper exploration into the unique, ancient and far-flung lands, peoples and music's of Ethiopia. On this journey, the band members worked through loss and bereavement, through discovery and new experiences, through a moveable song writing that took place across many years and many locations. The displacement, write the band, gave deeper meaning to their own identities. The results - as documented on Thread of Gold - weave together the many ribbons of Hejira's musical outlook. Years of performing together in jazz and big-band ensembles, and alongside such profiles as Amy Winehouse, Nitin Sawhney, Floating Points and Eric Lau has informed an instinctual and mutually inspiring compositional relationship within the band. Their intelligent, soulful, leftfield-aligned take on pop music underpins their love of the otherworldly, the mesmerising, and the unpredictable. Their time in Ethiopia eventually became the binding force around several years' worth of song writing and self-recording. 'Ethiopia became a backbone and a point of reference,' multi-instrumentalist and producer Sam Beste offers. 'The experience helped to galvanise everything we had written into a cohesive work.' Partly dedicated to the memory of Rahel's uncle Gashe Selelshie ('the type of person you learn so much from just by being in his company'), Thread of Gold sparkles with articulate and subtle instrumentation, ear worming choruses, orchestral arrangement, emotive confession, East African field recordings and close vocal harmonies, all illuminating a profoundly moving and intimate personal expression. Hejira formed in 2010 after Beste, Debebe-Dessalegne and fellow multi-instrumentalist Alex Reeve set up their home studio in South East London. The line-up expands to include additional musicians both in the studio and onstage. These are never hired hands, but musical 'cousins' to the 'siblings' of the core trio. In 2016, following the release of their acclaimed 2013 debut LP Prayer Before Birth on Matthew Herbert's Accidental Records, and EPs on Accidental and Floating Points' Eglo Records, the band set up their own Lima Limo Records. The label - named after a winding mountain path in northern Ethiopia - has become a home not only for their own releases, but also for like-minded creative souls releasing music just as strange and wonderful as Hejira's.

Side A:
Save It For Another
Joyful Mind
Ribs
Lima Limo

Side B:
Empire
A Taxi Man
Seven
You
Thread Of Gold