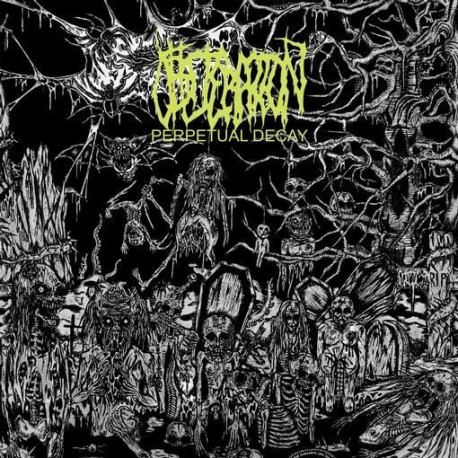 THE 2007 DEBUT ALBUM OF VINTAGE-STYLED OLD SCHOOL DEATH METAL BRUTALITY FROM THE CURRENT NORWEGIAN SCENE MASTERS OBLITERATION was spawned in Kolbotn (the hometown of Darkthrone, no less), in 2001, and after some line-up changes, punk-style dabbling and experimentation with two bass players at the same time, it soon became clear that Death Metal was to be their true calling. After releasing their initial demo in 2004, the youngsters received a great response from the Norwegian underground metal scene resulting in a vital gig at the high-profile Inferno festival in 2005, and soon after, the 7" EP 'Total Fucking Obliteration' was released. This was swiftly followed by intense rehearsals of material intended for their debut studio album. These rehearsal recordings led to their first record deal, when Nocturno Culto of Darkthrone signed them to his prestigious label Tyrant Syndicate, a sub-label of Peaceville Records at the time, after being mightily impressed with what he was hearing. And so, in January 2007 the band entered Subsonic Society Studio with Lars Klokkerhaug (who has recorded/produced the likes of Enslaved & Darkthrone) to record their debut album 'Perpetual Decay'; a slab of brutal metal with a foot firmly planted in the old school yards of bands such as Autopsy, & raw organic production values to match. This edition of 'Perpetual Decay' is presented on vinyl for the first time, with updated cover using the original artwork drawing.