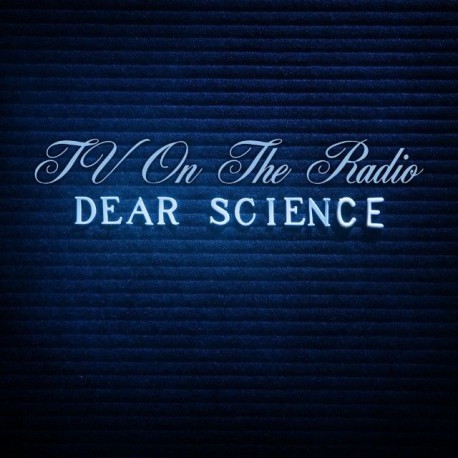 Tv On The Radio - Dear Science

TV On The Radio's story is one of synchronicity, of serendipity, of epiphany. TVOTR began with Tunde Adebimpe (vocals) and David Sitek (multi-instrumentalist and production kingpin) being roommates, drinking way too much coffee, making art. They started trading tapes of each other's four track recordings and thought it'd be fun to try to make "a real record." Touch And Go released TV On The Radio's stunning EP "Young Liars" in July 2003, and it immediately marked them out as one of the most musically innovative bands to have emerged in years. Their debut full-length "Desperate Youth, Bloodthirsty Babes" set 2004 off to a dramatically positive start. With new member Kyp Malone sharing songwriting, guitar and vocal duties, TVOTR was quickly on the path to the being one of the most talked-about new groups in America. After touring as a trio, Jaleel Bunton (drums) and Gerard Smith (bass) joined the band to create the official TVOTR line up.The band's second studio album, Return to Cookie Mountain, leaked in early 2006 and garnered pre-release praise from such outlets as Pitchfork before its official release in July. Filled with guest appearances from David Bowie, Celebration, Antibalas, Blonde Redhead, and YYY's Nick Zinner.