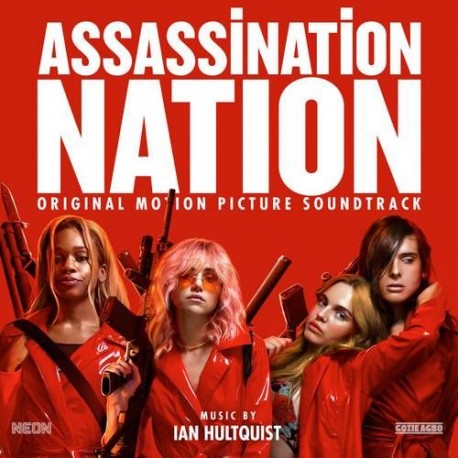 Assassination Nation (Original Motion Picture Soundtrack) - 'Raincoat Red' Vinyl - Ian Hultquist 2X LP On 'RAINCOAT RED Vinyl in double-wide Album Sleeve. Includes the songs 'Rage by Isabella "Machine" Summers, 'Brat' by Abra and 'We Can't Stop' by Jackson State University Marching Band, The "Sonic Boom of the South" The score is by Passion Pitt's's former keyboard player and synthesist Ian Hultquist. It plays big on screen throughout the entire second half of the film, including extended sequences where it's set to screen images for minutes at a time. This is the first truly contemporary electronic film score in some time that does not seek to duplicate the Stranger Things retro esthetic. Assassination Nation creates its own new and fresh contemporary electronic score that is both modern and very accessible to non-filmscore audiences in the same way that It Follows and Under The Skin did.

Side A:
Mayor Bartlett
#FAIL
The Life & Texts of Principal Turrell
Internet Trolls
I'm Not the Monster You Think I Am
Half of Salem
Slay'em High Killa
A Star is Born
Assassination Nation

Side B:
Blow Us a Kiss
Take Salem Back
Marty's Confession
Home Invasion
On the Run

Side C:
Kiss Me
Be Gentle
Crimson
The Shootout
Surrender
Rally Ur F_cking Crew