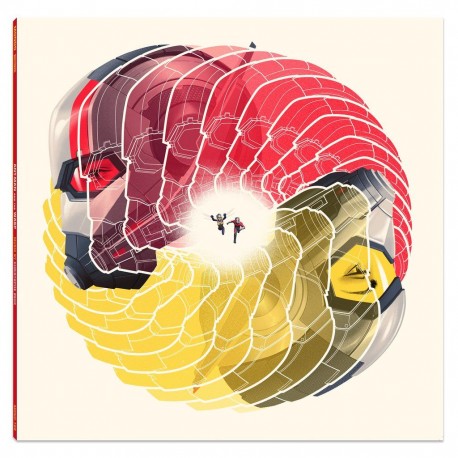 Mondo Music in partnership with Hollywood Records, is proud to present the first in a series of MCU soundtracks: the premiere vinyl release for Marvel Studios' ANT-MAN & THE WASP. Award-winning composer Christophe Beck re-teamed with the Marvel Cinematic Universe to score ANT-MAN & THE WASP, the sequel to 2015's ANT-MAN, one of the most kinetic and musically inventive chapters in the on-going series. The closing credits theme, "It Ain't Over 'Til The Wasp Lady Stings," is sequenced at the beginning of the album to properly prepare you for the brilliant work of what Beck is doing in this film and for these characters. Bouncing between themes epic in scope, emotionally powerful ("Ghost in the Machine"), action-packed ("Hot Wheels") and light on its feet ("World's Greatest Grandma"), his work here is musically lush and multi -layered, absolutely begging for repeat listens. This is one of the MCU's most dynamic and entertaining soundtracks. Featuring original artwork by Phantom City Creative and 14 previously unreleased bonus tracks, pressed on 2 x 180 Gram Black Vinyl. ARTWORK BY: Phantom City Creative

Side A:
It Ain't Over Till The Wasp Lady Stings
Prologue
Ghost In The Machine
World's Greatest Grandma
A Little Nudge
Feds
Ava's Story

Side B:
Wings & Blasters
Utmost Ghost
Tracker Swarm
Cautious As A Hurricane
Misdirection
Quantum Leap
I Shrink, Therefore I Am
Partners
Windshield Wipeout