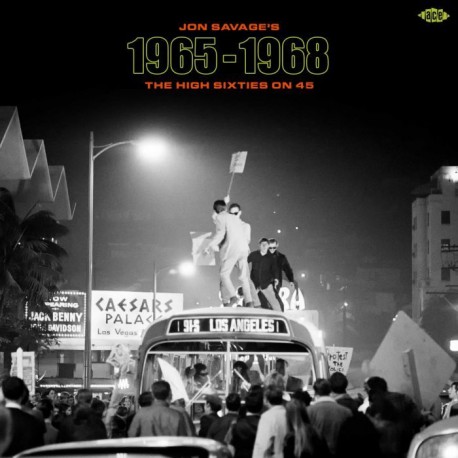 Spread over four sides of two 33rpm 12-inch albums, this is a love letter to the 7-inch single. Since 2016, author Jon Savage has collaborated with Ace Records in a mapping of the mid-to-late 60s in terms of 45rpm singles. We began with 1966 and time stretched backwards and forwards over 96 songs and four double CDs - one collection per year between 1965 and 1968. We did discuss releasing the series on LP format but each compilation would have needed a triple album. So, by way of a rÃƒÂ©sumÃƒÂ©, we've decided to compress the four years into one year per side: beginning in early 1965 and ending in very late 1968. The intention is to give a flavour of each CD compilation, and an idea of their reach across the two albums. You'll also find songs that have not been released on any official vinyl album before, including the single version of 'Rain' by Kak, the overdubbed 'People! Let's Freak Out' by the Freaks Of Nature and the preview pressing of the MC5's 'Kick Out The Jams', to name but three. Pressed on 180g orange vinyl, housed in a heavy- duty gatefold jacket, with copiously illustrated track notes on the inner bags.

Side A:
That's The Way It's Got To Be - The Poets
Incense - The Anglos
Nobody Knows What's Goin' On (In My Mind But Me) - The Chiffons
Agent Double-O-Soul - Edwin Starr
Too Many People - The Leaves
London Town - The Pretty Things
Hey Gyp (Dig The Slowness) - Donovan
We Sell Soul - The Spades

Side B:
Bad Little Woman - The Wheel-A-Ways
The Other Place - The Seeds
Walkin' My Cat Named Dog - Norma Tanega
Help Me (Get The Feeling) Pt 1 - Ray Sharpe with The King Curtis Orchestra
Along Comes Mary - The Association
It To Em JB Pt 2 - Rex Garvin & The Mighty Cravers
Tell Me That You Love Me - James Brown & The Famous Flames
People! Let's Freak Out - The Freaks Of Nature
The Hunter Gets Captured By The Game - The Marvelettes

Side C:
Never Ever - The Action
Take Me In Your Arms And Love Me - Gladys Knight & The Pips
I'm Five Years Ahead Of My Time - The Third Bardo
Mr Soul - The Buffalo Springfield
Hold On - Sharon Tandy
At The Third Stroke - The Picadilly Line
Slim Jenkin's Place - Booker T & The MG's
The Music Goes Round My Head - The Easybeats
Side D:
Danse A La Musique - The French Fries
Wonderboy - The Kinks
I Say A Little Prayer - Aretha Franklin
Rain - Kak
Lord Of The Manor - The Everly Brothers
Train To Nowhere - Savoy Brown
Kick Out The Jams (Preview Pressing) - MC5