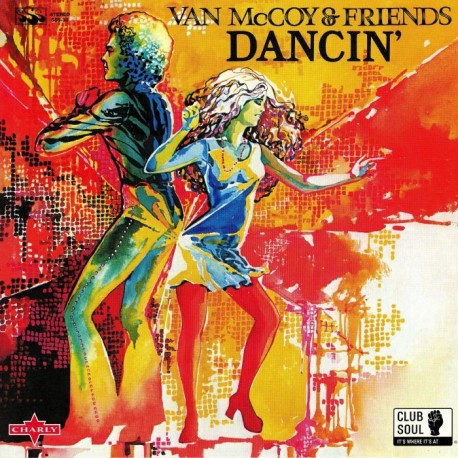 FIRST EVER REISSUE OF THE CULT COLLECTOR'S ALBUM FROM THE GRAMMY AWARD WINNER AND SOUL MUSIC HERO NEWLY REMASTERED FROM THE ORIGINAL MASTER TAPES FEATURING A PREVIOUSLY UNRELEASED TRACK INCLUDES THE NORTHERN SOUL CLASSICS "HELP IS ON THE WAY", "JUST ANOTHER DRESS REHEARSAL", "SWEET AND EASY" & "AIN'T GOT NO LOVE" To the pop buying public Van McCoy is known for his 1975 Grammy Award chart-topper "The Hustle", after which he sadly died of a heart attack in 1979 at the age of only 39. To rare soul fans Van McCoy is a hero: THE most prolific writer and producer of Northern Soul of all time, working with a host of legendary artists including Kendra Spotswood (aka Sandi Sheldon) with whom he had a five-year relationship. Dancin' was originally released by Shelby Singleton in 1976 on his SSS International label, although all of the ten original songs were recorded much earlier, circa 1968-69. With its kitsch cover and out-of-kilter track list, copies soon filtered through to the UK and into the hands of club DJs at Wigan Casino with perhaps "Help Is On The Way" becoming the stand-out track. Richard Searling played the mid-tempo "Just Another Dress Rehearsal" in the latter days of the club while an unreleased instrumental version of "Ain't Got No Love" was played post-Wigan from a studio acetate. Club Soul are proud to present the first ever reissue of this cult album, now complete with the aforementioned, previously unreleased, instrumental. It is presented on 180gm heavyweight audiophile vinyl in a single sleeve featuring a Club Soul insert with new sleeve notes. Dancin' joins a growing catalogue of premium music on the Club Soul imprint - including crossover hits compilation Shades of Soul, the All-Dayer LP, and newly compiled albums that celebrate the clubs of the original Northern Soul Scene - The Scene Club, The Twisted Wheel, Wigan Casino Soul Club, Catacombs and the forthcoming The Golden Torch.

Side A:
Sweet And Easy
If I Could Make You Mine
The Generation Gap
Help Is On The Way
What Kind Of A Man

Side B:
The Woman Who Made Me A Man
Just Another Dress Rehearsal
With All My Heart
Ain't Got No Love
Back Trackin'