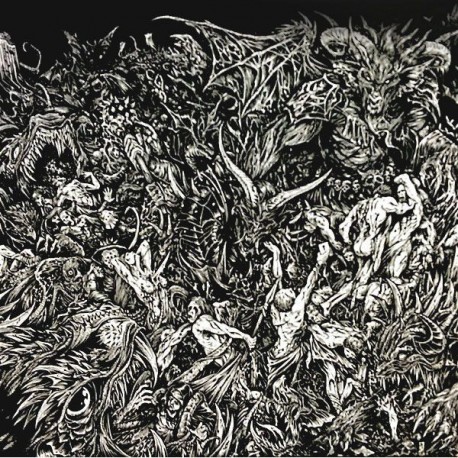 Imprecation rises again from the blasted lands of Texas with their darkest spell ever, Damnatio Ad Bestias. This album expands upon the themes of their 2013 debut Satanae Tenebris Infinita with deadly results. An aura of true Satanic majesty is unleashed in tracks like "Temple of the Foul Spirit", "Morbid Crucifixion", and "Baptized in Satan's Blood". Bludgeoning guitars, battering drums, and haunting keys create an experience that will terrify the unbelievers and convert the uninitiated. Formed in 1991, Imprecation has become a vaunted institution in the underground, with their now-classic Theurgia Goetia Summa compilation cited by bands across the globe. They have no need for trendy tags like "old school death metal", for theirs is simply death metal as it it was intended-evil, dangerous, and crushing.

Side A:
Temple of the Foul Spirit
Morbid Crucifixion
Baptized in Satan's Blood
Beasts of the Infernal Void

Side B:
Damnatio Ad Bestias
Dagger, Thurible, Altar of Death
The Shepherd and the Flock
Ageless Ones of None