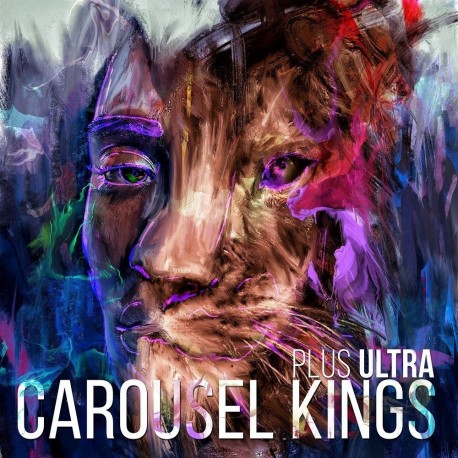 1 x 12" Vinyl Album With ten guest appearances across eleven tracks, all of CAROUSEL KINGS' muscles are flexed across Plus Ultra, from 'Truth Seekers' (which sounds like a session from 311's Transistor), to the punchy title track, the albums contemplative centerpiece 'Lock Meowt' and breezy 1980's tinged closer 'Jamais Vu.' Plus Ultra is a tour de force, showing remarkable achievement from a band that has scarcely left the road since their 2008 inception. Written in between dates of their 2018 tour schedule, Plus Ultra was produced by Ricky Armelino (Ice Nine Kills, This Or The Apocalypse). As work around the album came together, CAROUSEL KINGS toured the UK for the first time and played select dates of the final Vans Warped Tour. 'As soon as we got back from Europe we kind of went into hibernation and began creating what would become Plus Ultra,' admits vocalist, David Alexander. Musically, Plus Ultra goes far behind the limitations of pop-punk, adding a deeper and subtle, diverse selection of material, including a whopping ten guest appearances. 'Plus Ultra is the first album we have had a female voice on which we are very stoked about!' exclaims Alexander. 'In addition to having the great Lexxe on 'Move Slow,' this is the first album we have experimented with these different sounds, including a ukulele and saxophone feature spot on 'Shelter,' and lots of electronic sounds throughout.' CAROUSEL KINGS sought to build on the foundation of 2017's critics favorite Charm City, and expand on Plus Ultra. 'Plus Ultra is a culmination of years of growth and we're ready to wok our hardest, create joy through music, and light a new fire under our own asses,' promises guitarist and vocalist William Barovick. 'Plus Ultra translates to simply mean 'further beyond,' but it has many different meanings and an interesting history behind it,' Alexander laments. 'Its origins date back to the King of Spain, Charles V, who used the phrase as his motto. It also helped to signal and warn sailors that the edge of the known world was approaching and to explore no more.' The band once again called on world-renown artist Archan Nair to create the cover, inspired by some Jimi Hendrix graffiti the band witnessed in Germany. 'Funnily, I saw it just before I actually met Archan in real life for the first time,' Alexander laughs. 'When he and I discussed the concept of 'further beyond,' he felt a lion would be the strongest symbolically.' Barovick adds, 'We just want people to sing-a-long and be happy they spent their minutes listening to us. I think Plus Ultra is a variety of feelings and I hope listeners can find cool ways to interpret and connect with each song.'