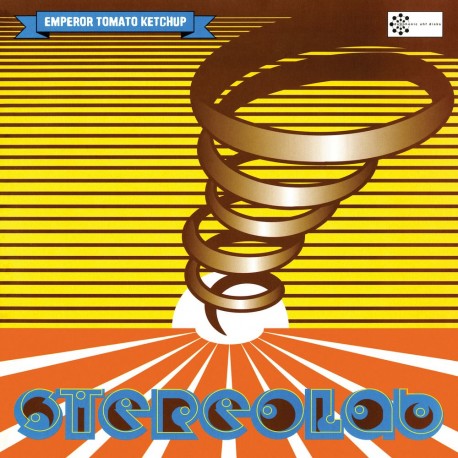 Along with the image of Cliff - the little chap with the gun who became Stereolab's semi-official mascot - Emperor Tomato Ketchup is probably the thing that defines the band in the popular consciousness. A critical success upon impact, the 1996 record ended up in many 'best of the decade' lists a few years later - not bad when you consider the competition. If you took a straw poll among fans of Stereolab as to what their best album was there's a good chance that Emperor Tomato Ketchup would come out on top.

Of course the main reason that Emperor Tomato Ketchup remains so beloved is that it's full of fantastic tracks. Stereolab were a singular band, the sort who made music only they could make. Any other group trying to blend influences from Krautrock, grunge, bossa-nova, mid-Century French chansons and whatever else they fancied at the time would have fallen flat on their face, but Tim Gane and Laetitia Sadier's gang make it sound like the most natural thing in the world. As such, Emperor Tomato Ketchup acts as a missing link between the pioneering work of Can and Neu! and the experimental gains groups like Animal Collective would make a few years down the line.

Duophonic and Warp are currently issuing extended sets of several of Stereolab's studio full-lengths. They've done another fine job with the expanded edition of Emperor Tomato Ketchup - along with the original thirteen tunes we are also treated to a plethora of demos here as well as bonus cut 'Old Lungs' and the original mixes of 'Noise Of Carpet' and 'Percolator'. As with all of the other expanded editions in the series, Emperor Tomato Ketchup has been remastered from the original tapes. A poster, Tim Gane's liner notes and clear vinyl pressings are in store for those who purchase the LP version.