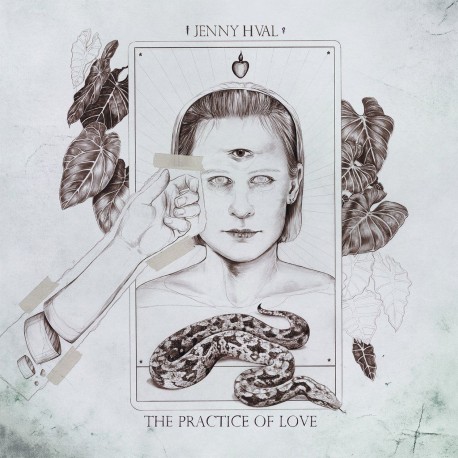 Jenny Hval - The Practice Of Love

At first listen, The Practice of Love, Jenny Hval's seventh full-length album, unspools with an almost deceptive ease. Across eight tracks, filled with arpeggiated synth washes and the kind of lilting beats that might have drifted, loose and unmoored, from some forgotten mid-'90s trance single, The Practice of Love feels, first and foremost, compellingly humane. Given the horror and viscera of her previous album, 2016's Blood Bitch, The Practice of Love is almost subversive in its gentleness-a deep dive into what it means to grow older, to question one's relationship to the earth and one's self, and to hold a magnifying glass over the notion of what intimacy can mean. As Hval describes it, the album charts its own particular geography, a landscape in which multiple voices engage and disperse, and the question of connectedness-or lack thereof-hangs suspended in the architecture of every song. It is,an album about "seeing things from above-almost like looking straight down into the ground, all of these vibrant forest landscapes, the type of nature where you might find a porn magazine at a certain place in the woods and everyone would know where it was, but even that would just become rotting paper, eventually melting into the ground." Prompted by an urge to find a different kind of language to express what she was feeling, the songs on Love unfurl like an interior dialogue involving several voices. Friends and collaborators Vivian Wang, Laura Jean Englert, and Felicia Atkinson surface on various tracks, via contributed vocals or through bits of recorded conversation, which further posits the record itself as a kind of ongoing discourse. "The last thing I wrote, which was my new book, had quite an angry voice," says Hval, "The voice of an angry teenager, furious at the hierarchies. Perhaps this album rediscovers that same voice 20 years later. Not so angry anymore, but still feeling apart from the mainstream, trying to find their place and their community. With that voice, I wanted to push my writing practice further, writing something that was multilayered, a community of voices, stories about both myself and others simultaneously, or about someone's place in the world and within art history at the same time. I wanted to develop this new multi-tracked writing voice and take it to a positive, beautiful pop song place... A place which also sounds like a huge pile of earth that I'm about to bury my coffin in."