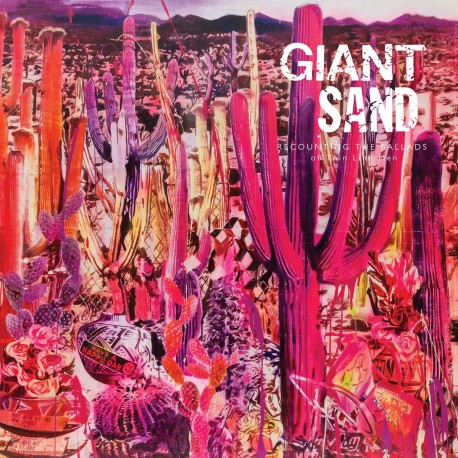 It's 33 and a third years since the seminal Giant Sand and its country cousin The Band Of. Blacky Ranchette entered the studio to lay down their second albums. Yes. Both bands had recorded their second albums each. Two sides of the multi-faceted hyper-productive Howe Gelb. "I was turning 28," he recalls, "and had been wanting to make and release albums since my early 20s, but only recently had figured out how. It was time to make up for lost time." Time was of the essence. That thin line between then and now has seen journeymen Giant Sand release 27-ish albums, their latest, 'Recounting The Ballad Of The Thin Line Men' turning the clock back to 1986's 'Ballad Of A Thin Line Man', picking over the bones and making a whole new soup. All these years on, the latest incarnation of Giant Sand: Howe Gelb (guitars, piano) Tommy Larkins (drums) and Th ger Lund (bass), have dusted off the old vinyl and re-imagined those heady days - they've polished these buried gems, reignited some truculent tirades and rekindled an ageless angst. The revamp re-orders the tracks, drops a couple and adds 'Reptillian', a previously lost song hailing from their album's 25th anniversary re-issue, a tune that opens proceedings and basks in all its crinkly glory. There's also two takes of 'Tantamount'. The unique thing about Giant Sand' is they make it all their own, they sound like no-one else. The songs remain the same, but somehow completely different. Howe: "We were a fine storm. The greatest storm in terms of tumultuous velocity and pelting bluster. It proved unstoppable... for a minute".

Side A:
Reptilian
A Hard Man To Get To Know
Desperate Man
You Can't Put Your Arms Around A Memory
Tantamount

Side B:
Who Am I
Body Of Water
Graveyard
The Chill Outside
Thin Line Man