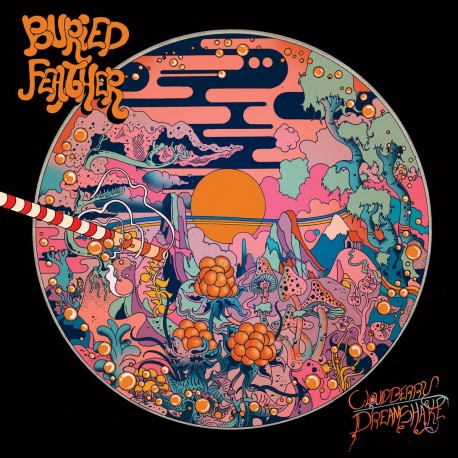 300 HAND NUMBERED 180GM VINYL LPS INCLUDES INSERT & DOWNLOAD CARD. Melbourne psych-rock trio Buried Feather return with their highly anticipated third studio album Cloudberry Dreamshake. After a busy 2018 which saw the band reissue their self-titled debut album and tour Europe for the first time, Buried Feather have just put the finishing touches on a new record drawing on a love of late 60s British psychedelia. The album is the follow up to 2017's fuzz-rocking Mind of the Swarm, which saw the band sign with german stoner label Kozmik Artifactz. Mind of the Swarm was well received both locally and internationally, earning an "Album of the Week" nod from PBSfm in Melbourne and named as one of the year's best releases by Jus Oborn of UK doom legends Electric Wizard. Buried Feather have developed a loyal following at home with their hypnotic live performances drawing comparison to Spacemen 3 and Dead Meadow and will be playing a string of launch shows through October/November in support of Cloudberry Dreamshake. Proudly released in Australia by Cobra Snake Necktie Records.