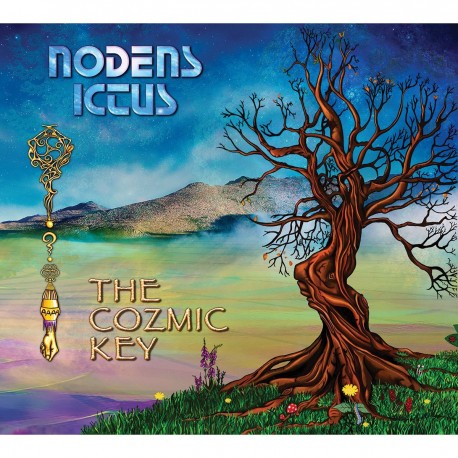 THE ETHEREAL OFFSHOOT FROM THE LEGENDARY PSYCHEDELIC BAND OZRIC TENTACLES. NOW ON THE MADFISH LABEL FOR THE FIRST TIME ON SPECIAL EDITION 'COZMIC BLUE' VINYL. Nodens Ictus are a British electronic music project formed by Ed Wynne & Joie Hinton in 1986 as an ethereal offshoot of UK psychedelic rock band Ozric Tentacles. 'The Cozmic Key' was the first Nodens album for 17 years when self-released in December 2017. With various line-ups over the years, the band have played live semi-frequently since the late '80s often supporting Ozric shows, and 2017 saw the current line-up (Ed Wynne and son Silas Neptune) head out on a 6-date UK tour as well as summer psychedelic UK festivals in 2018. Ed Wynne is, without doubt, a gifted instrumentalist, a visionary, a prodigal symphonist and one of the UK's leading influential musicians. He is credited as one of the linchpins of the UK festival scene's re-emergence along with his band Ozric Tentacles, who formed at Stonehenge Free Festival 1983 and became staples of the Glastonbury Festival, with their most recent performance at Glastonbury in 2016 on the Glade stage. This release of Nodens' 'The Cozmic Key' follows Ed Wynne's debut solo album 'Shimmer into Nature' release on sister label Kscope in January. 'The Cozmic Key' consists of 55 minutes of happy spiralling pathways through many different landscapes of an often-unusual nature. It represents the ambient and electronica branches of the Ozrics tree, with a focus on synths and sequencing that followed on from the music of 'Technicians of the Sacred', Ozric Tentacles' 2015 album. This LP edition is presented on special edition 180gm heavyweight blue vinyl in single sleeve packaging.